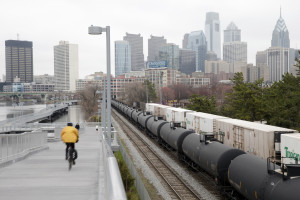 In this photo taken April 9, 2015, a cyclist rides by train tank cars with placards indicating petroleum crude oil standing idle on the tracks, in Philadelphia. Rail tank cars that are used to transport most crude oil and many other flammable liquids will have to be built to stronger standards to reduce the risk of catastrophic train crash and fire under a series of new rules unveiled Friday by U.S. and Canadian transportation officials. (AP Photo/Matt Rourke)