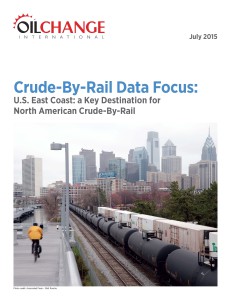 An examination of crude-by-rail data shows that the U.S. east coast has become one of the busiest regional destinations for hazardous crude-by-rail traffic. Oil Change International used publicly available Department of Energy (EIA) data as well as subscription data from Genscape to examine the growth of crude-by-rail to one of the most densely populated areas of the United States.