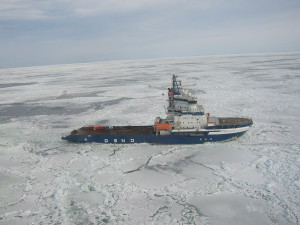 Shell’s comedy of errors that is its Arctic drilling campaign never ceases to amaze.

You would have thought the oil giant would have learned from its disastrous attempt three years ago when one of its drilling rigs, the Kulluk, ran aground. Another one, the Noble Discoverer, had a near mishap, too.

For the last few months, as Shell has prepared to yet again try and find oil in the Arctic, the company has tried repeatedly to reassure shareholders and a sceptical public that everything is safe in the company’s hands.

Take today’s Wall Street Journal, which states that “Shell executives say they have both costs and safety under control”.

The paper quotes Ann Pickard, the head of Shell’s Arctic division as saying: “Everybody’s watching to see if we’re going to fail or succeed out there.”

With the world watching you would have thought the company would be checking and re-checking everything is safe and in working order. It appears that it is not. As the Journal goes on to say “the project has already hit a snag.”

One of the vessels in Shell’s 29 ship Arctic fleet, the Finnish made ice-breaker Fennica, has had to return to Unalaska Bay with a 39-inch-long, 2-inch wide hole in its hull as well as a leak in its ballast tank. The hole was discovered soon after the ship left its mooring.

Without the Fennica, Shell cannot operate in the Arctic. Although it is an ice-breaker, the Fennica is also said to be “key” to Shell’s oil spill containment plans. If there is a blow out the ship is carrying specialised equipment that should, in theory, stop the oil flow. This equipment might now have to be moved to another ship or Shell might be forced to find another ship.

It may even have to go and get a revised permit. The local press is now arguing that “Shell might be forced to go back to the Interior Department for a revised authorization. The federal government has insisted on a full emergency response system during the drilling process.”

It is currently unclear whether the repairs will delay Shell’s drilling operations this summer. This probably depends on whether the ship can be repaired on site or will need a dry dock for more extensive repairs.

The company’s critics were not impressed. “In just a few days, Shell wants to start drilling for oil in one of the most delicate ecosystems on earth,” said Greenpeace USA spokesman Travis Nichols.

He added: “The company clearly hasn’t improved its operations from its nearly catastrophic 2012 attempt to drill in Alaska and so we can expect news like this to continue to come in until the Obama administration finally stops this doomed project from going forward.”