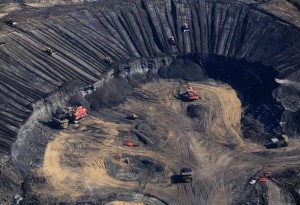 Often the debate about the ecological and cultural impact of the Canadian tar sands focuses on the day to day: the carbon intensity of the mining operations and routine air and water pollution impacting the First Nations and other local communities.

Because today’s impact is so great we often forget about tomorrow. We forget about the tar sands toxic legacy and how that will be cleaned up.

Now the Alberta Auditor General is arguing in a report that the Province has not paid enough attention to ensuring that the vast tar sands mining area – which has been critically compared to Mordor from Lords of the Rings – is adequately cleaned up when companies stop operating.

And it warns that, due to this failure, Albertans themselves might have to pay some of the vast clean-up costs to restore the trashed landscape.

It takes issue with what is called the Mine Financial Security Program or MFSP. The report warns that, due to the MFSP’s failings, “Albertans bear a degree of risk that reclamation will not be completed by the mine operator”.

It adds: “If there isn’t an adequate program in place to ensure that financial security is provided by mine operators to fund the conservation and reclamation costs associated with their mine operations, mine sites may either not be reclaimed as intended or Albertans could be forced to pay the reclamation costs”.

The Auditor General, Merwan Saher, argues that there is a fundamental flaw in MFSP and the way the Province allows tar sands operators to over-estimate the value of their resources, which then allows them to delay the amount of money they have to put aside for end of life clean up costs.

There is also another, related, fundamental flaw in the MFSP rules, which is that they do not take into account long-term price variability and how that might impact the sector.

If the rapid price plunge means that a tar sands operator goes bust then it looks likely that Albertans will once again have to pay for reclamation. So if a mine has been over-estimating reserves and then goes bust due to the oil price plunge, there could be large unpaid bills.

“The MFSP is not designed to respond quickly to sudden fluctuations in the price of oil,” says the report, adding that “It is important to recognize that the department has accepted the risk of not protecting against a broad based and rapid structural decline in the oil sands.”

This decline continues. Back in May this year, Oil Change International issued a report which found that over 1.6 million barrels per day of planned expansion in tar sands production was “currently delayed or on-hold as the industry struggles to identify a profitable path forward for 39 projects.”

This decline is set to continue. Another report out yesterday predicted that the tar sands will experience a “dramatic downturn in 2015 as the impact of the oil price fall impacts upon project economics and company budgets”.

Predicting the future is notoriously difficult, by if the oil price stays low over the next few years, and some tar sands operators go bust, Albertans may well find themselves with rather a large clean up and restoration bill. And they will only have their regulators to blame for this lax oversight.