By Hannah McKinnon with contributions from Greg Muttit

Would you take it seriously if tobacco companies announced that smoking trends weren’t expected to change much over the next 30 years?

And imagine then, that this is what governments used to make tobacco policy: “Forecasts show that people aren’t going to quit smoking, steady rates of smoking around the world are inevitable, so all anti-smoking policies will assume not much is going to change.”

Of course: it would be reckless to listen to the predictions of an industry desperate to stay relevant as the world moves on. And yet, this is exactly what we do when it comes to energy forecasts and it is a huge problem.

The world’s most widely-used energy forecasts come either directly from the fossil fuel industry itself (British Petroleum’s Energy Outlook and Exxon’s Outlook for Energy for example), or from arms length bodies set up to support the industry (the International Energy Agency’s World Energy Outlook, or the Energy Information Administration forecasts), agencies that continue to use the fossil fuel industry’s methods and assumptions despite clear real-world trends to the contrary.

Not surprisingly, industry (and similar) models expect the world to remain heavily dependent on fossil fuels well into the century – still counting on them for some 70% of our energy by 2050. And rather than questioning anything, governments around the world use numbers like these as the basis for policies, and more pervasively, for excuses for inaction when it comes to climate action and energy reform.

We call it fossil fuel fatalism – the misplaced acceptance that fossil-fuel domination of our energy mix is somehow inevitable and will continue decades into the future regardless of what we do.

It is one of Big Oil’s most successful strategies when it comes to its efforts to convince the world that we can’t live without it. This fatalism can be so pervasive that we all buy into it in one way or another.

Big Oil is selling us a tale that it is impossible to do better, impossible to innovate, impossible to learn, and impossible to change. If this were the attitude we had accepted over the past century, we would be in horse and buggies, spinning dials on a crackling radio, and sending telegrams. Human ingenuity should not be underestimated or undervalued, but this is exactly what fossil fuel fatalism requires us to believe.

But they are not just suggesting that we can’t change, they are ignoring the clear change that is already happening. Over recent years, growth in renewable energy markets has exceeded everyone’s expectations (except Greenpeace). There is a good reason for that: all of the major forecasts ignore the signals and actual market trends.

Take for instance the IEA’s near-term growth forecasts[1] for electricity generation by wind and solar, compared to the most recent actual growth data it had when making the forecasts. Data are shown from the new Special Report and from the last four issues of the flagship World Energy Outlook. Every year, the IEA has predicted a dramatic slowdown in wind and solar growth; every year it has been wrong. 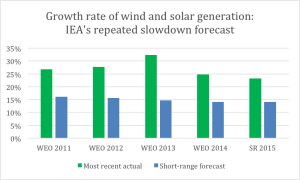 After the immediate slowdown, the IEA forecasts further deceleration into the future. The chart below shows its projections for growth rates of wind and solar generation out to 2030. 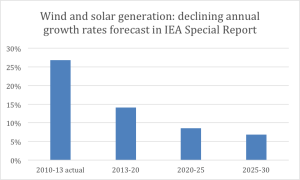 Since growth rates are compounded, this makes a big difference to the future. If annual growth rates of 25% were sustained, wind and solar would overtake coal as soon as 2024. Nor is this a far-fetched idea: a recent survey of 1,600 energy experts worldwide, in which half of the respondents believed that with policy action, renewables could account for 70% of generation by 2030.

We should give more credence to models and forecasts that look at real world trends today when it comes to renewables. Look at the energy choices people are actually making – whether to put solar panels on their roof or to switch to an electric vehicle. And stretch these choices into the future as clean energy costs fall further below those of coal or gas, and performance of electric cars outpaces that of internal combustion engines. Thinking of the world in this kind of bottom-up way, starting with those actual decisions, will give a very different outcome from the incumbency.

Fossil fuel fatalism is no doubt holding us back – but it is also a fragile strategy that the fossil fuel industry knows is on its last legs. Look no further than increasingly desperate efforts to lock-in production in places like the high-carbon tar sands, or the Arctic Ocean, even in the face of downright bad economics and incredible risk, they want to get it while they still can.

But that is where people power comes in. While governments are slow to clue in (or a bit too dependent on oil money), people are stepping up to fill that leadership void – by stopping pipelines, taking governments to court for stronger action on climate change, or standing up for the rights of vulnerable people on the front lines of fossil fuel development. Times are changing and we have to break our own fossil fuel fatalism to see where the future is already headed. The change in energy systems is happening, however much the likes of ExxonMobil or the International Energy Agency try to deny it.