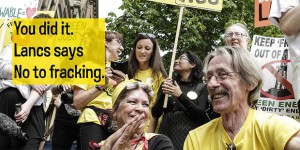 The British fracking industry was left in total disarray yesterday after Lancashire County Council voted overwhelmingly to oppose fracking in the North West of the country.

And now supporters of the fracking industry have reacted angrily to the decision by demanding that the British government overhaul the planning system to make it easier to frack.

After numerous delays, yesterday the Development Control Committee of Lancashire County Council voted to reject a proposal to frack by the controversial company Cuadrilla at Preston New Road.

You should not underestimate how significant the decision could be for fracking in the UK. “The prospects for UK shale gas have never looked bleaker”, wrote the head of the environment at the Guardian newspaper Damian Carrington yesterday. “Be in no doubt, it is a seismic decision.”

The Financial Times added that the vote “raises serious doubts over the longer-term prospects for fracking in the UK.” Carrington added bluntly: “the nascent fracking industry in the UK may never recover from this blow”.

It is easy to see why. The fracking company Cuadrilla had spent an estimated £100 million trying to push through the development in Lancashire. If they had been granted approval, it would have been the first full scale fracking in the UK. Now their strategy is in tatters, although it is likely they will appeal the decision meaning months – if not years – of legal wrangling.

But the committee voted overwhelmingly against Cuadrilla’s plans, citing that the development would cause “an unacceptable adverse impact on the landscape”, it would have an “adverse urbanising effect on the open and rural character of the landscape and visual amenity of local residents” and cause “unacceptable noise impact.”

What makes the vote so worrying for the fracking industry is that the local councillors went against the advice of planning officers who had recommend that fracking be approved. The committee also voted to reject Cuadrilla’s other application at Roseacre Wood last week.

The unexpected news yesterday was met with unbridled joy by anti-fracking campaigners, many of whom shed tears of joy.

Liz Hutchins, a senior campaigner at Friends of the Earth said: “This is a bigger win than anyone was expecting, it shows the huge strength of feeling here. There was no way councillors could go against feelings of local people. This is a real blow for Cuadrilla and government.”

But the fracking industry and its supporters reacted angrily to the vote and demanded that planning rules be changed, so that local democracy is easier to overrule.

Ken Cronin, chief executive of industry lobby organisation, the UK Onshore Operators Group, which represents the shale industry, called on the government to review the planning process. “This after 15 months of a long, drawn-out process cannot be right, and I urge the government to urgently review the process of decision-making.”

Dr Adam Marshall, from another business lobby organisation, the British Chambers of Commerce, echoed similar sentiments, arguing that the decision was “perverse, short-sighted and timid” and said “the government now needs to step in”.

So did the UK’s leading climate sceptic organisation which is also vehemently pro-fracking. The Global Warming Policy Foundation, which is led by Lord Lawson, said “Shale exploration is clearly in the national interest and nimbyism should not stand in the way of Britain’s energy security.”

Calls like this would set a highly dangerous precedent where local democracy is overridden by a government and its influential pro-fracking friends in business. It should not be allowed to happen.

But I am sure the fracking industry will be working behind the scenes to get what it wants. You don’t spend £100 million and walk away at the first hurdle.