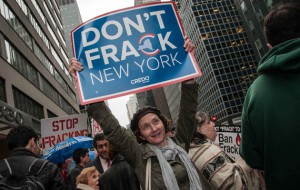 There was more bad news for the fracking industry yesterday when New York State became the first US state to officially ban fracking.

After almost seven years of “exhaustively” studying the issue, the office of the Democratic Governor Andrew Cuomo released its final report on the subject, arguing that banning the controversial technique was the only “reasonable” thing to do.

For a long time on this blog I have been arguing that the health impacts of fracking are unknown and it will take years for the science to catch up and analyse how dangerous the technique is. Now the New York State Governor’s office is arguing that the risk to public health is just too great, too.

The State’s report concludes that: “In the end, there are no feasible or prudent alternatives that would adequately avoid or minimize adverse environmental impacts and that address the scientific uncertainties and risks to public health from this activity.”

Launching the report, Department of Environmental Conservation Commissioner, Joe Martens said: “After years of exhaustive research and examination of the science and facts, prohibiting high-volume hydraulic fracturing is the only reasonable alternative.”

Martins added that “High-volume hydraulic fracturing poses significant adverse impacts to land, air, water, natural resources and potential significant public health impacts that cannot be adequately mitigated. This decision is consistent with DEC’s mission to conserve, improve and protect our state’s natural resources, and to enhance the health, safety and welfare of the people of the state.”

Yesterday’s announcement was a further hardening of the State’s draft position, which was published back in December last year. Since then they have received some 80,000 public comments, the vast majority which were opposed to fracking.

At the time, the Acting Department of Health Commissioner Dr. Howard Zucker had argued that: “I have considered all of the data and find significant questions and risks to public health which as of yet are unanswered.”

Zucker went on to say he felt it was “reckless to proceed in New York until more authoritative research is done.” He had asked himself the simple question: “would I let my family live in a community with fracking?” and come up with the simple answer: no. “I therefore cannot recommend anyone else’s family to live in such a community either,” he said.

Yesterday’s announcement was welcomed by environmental groups: Deborah Goldberg, the managing attorney for Earthjustice said: “We salute Governor Andrew Cuomo’s refusal to bow to industry pressure. He had the courage to do what no other state or federal leader has had the courage to do: let the available scientific evidence dictate whether fracking should proceed in New York.”

“New Yorkers can celebrate the fact that we won’t be subjected to the toxic pollution and health risks fracking inevitably brings,” added Alex Beauchamp, the North East regional director for Food and Water Watch.

Although, yesterday is a significant victory for the anti-fracking movement, New York remains the only US state with large shale gas resources to ban fracking so far.

The pressure will now grow on others states to follow suit.