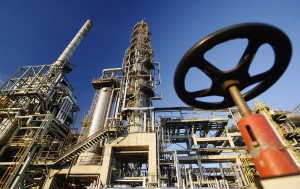 LEUNA, GERMANY – JANUARY 10: The TOTAL oil refinery is seen on January 10, 2007 in Leuna, Germany. Crude oil from Russia has stopped flowing to the PCK refinery since 6:00 AM January 8 due to a row between Russia and Belarus over how much Belarus should pay for Russian oil. Initial reports claimed Belarus had turned off the flow of crude oil through the “Druzhba” pipeline as a means to negotiate a better price. German oil reserves are still substantial, though Chancellor Angela Merkel announced her country must not depend too much on one source for its energy needs. (Photo by Katja Buchholz/Getty Images)