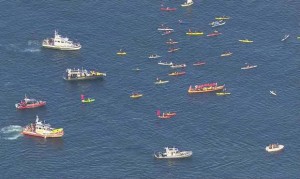 As dawn broke over Seattle yesterday, dozens of kayakers – known as kayaktivists – paddled out to confront Shell’s vast Polar Pioneer drilling rig and tried to prevent it from leaving port.

In the ultimate David and Goliath protest, the small kayaks and boats formed a blockade around Shell’s huge rig in order to try and stop it from heading to the Arctic, where the oil giant hopes to start drilling this summer.

However the Coast Guard started plucking the “kayaktivists” from the water enforcing a 500-yard safety buffer around the rig.

Many of the activists were members of Greenpeace. “Shell was trying to get the Polar Pioneer out of Seattle under cover of darkness, but the kayaktivists prevented them from leaving for several hours and exposed what they were doing to the world,” said Travis Nichols with Greenpeace.

One of those detained was Seattle City Council member, Mike O’Brian. “That monstrous rig is headed to the Arctic to attempt to do something unconscionable,” he texted as he was being processed by the Coast Guard authorities after being detained.

Later he gave further reasoning as to why he was prepared to be arrested: “We already have more oil than we need to safely transition away from fossil fuels,” O’Brian said. “This attempt to get more oil in the Arctic, just like Keystone pipeline or the Bakken oil fields, is one of these game changers that puts so much more oil in the system that will cause catastrophic climate change and that will impact billions of people around the planet.”

Another activist who was detained by the Coast Guard was Kelly Mears, who unfurled a massive “Shell No” banner. “Ultimately, I think that it’s pretty negligent decision to allow the vessel to drill in the Arctic,” said Mears. “My personal moral compass wasn’t allowing me to stand idly by and bemoan it as something that we can’t escape from.”

Shell, which is still waiting for its final permit approvals, meanwhile continued to spin the line that it remained “committed to operating in a safe, environmentally responsible manner”.

This is despite the fact that the oil giant concedes that it would never be able to adequately clean up an oil spill in the region and we cannot burn the oil it may find if we are to avoid runaway climate change.

Indeed the Guardian this morning has an interactive report on Shell’s Arctic drilling programme. The paper says simply:

“It is here that Shell plans to drill for oil, pulling the detonator on a carbon bomb which eventually could spray 150bn tonnes of carbon dioxide into the atmosphere.”

Shell’s “carbon bomb” is one of the main reasons why activists will continue to fight Shell. “The ship has a two-week journey to Alaska”, Greenpeace spokesperson Cassady Sharp said. “The movement has got quite big in this region. We expect the protests to continue.”