– By Greg Muttit and Hannah McKinnon

Last week, six European oil companies declared their apparent conversion to the climate cause. To much fanfare, Shell, BP, Total, Eni, Statoil and BG committed to being part of a constructive solution on climate change, asked for a formal role in international climate negotiations, and called for governments to adopt carbon pricing, in a letter to UN climate head Christiana Figueres.

For long-time oil-watchers, it was nothing new. The European companies have been claiming to be leaders in providing solutions to climate change since 1997, the year the Kyoto Protocol was signed. Then too, the solution was supposed to be all about carbon prices.

While less overtly nasty than ExxonMobil’s direct obstructionism, the European oil company approach has formed a different kind of block to climate action. 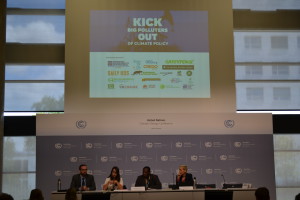 In the late 1990s, BP and Shell began a phase – later abandoned– of developing tiny but well-publicised renewable energy divisions, and BP deployed its ‘Beyond Petroleum’ advertising campaign. Not only did the positive positioning deflect criticisms of the companies, it propelled them into the heart of climate policy-making, where they have sought to ensure that any proposals were “realistic”, meaning that their own profits would not be impacted. By definition, preserving fossil fuel profits means not addressing the cause of climate change.

For example, from 2011 to 2014, Shell successfully lobbied the European Commission to drop binding renewable energy targets, in favour of a greater role for natural gas – and Shell’s business – in reducing carbon emissions. The idea of gas serving as a ‘bridge fuel’ from coal might have made some sense in the 1990s, but carbon budgets are now too tight for any new investment in fossil fuel infrastructure, especially in wealthy countries.

As for carbon pricing, the classic implementation was Europe’s Emissions Trading Scheme, launched in 2005. BP was a key architect of a UK prototype scheme established three years earlier, and worked hard (and successfully) to ensure the Europe-wide scheme followed the UK model. BP and others in the industry then repeatedly lobbied for an excessive allocation of emissions permits, the flaw which is universally acknowledged to have caused the scheme’s failure to reduce emissions.

The companies frequently attend international climate negotiations too, often with business lobby groups such as the International Chamber of Commerce, and sometimes as part of government delegations.

Thus when Shell boss Ben van Beurden said in February that he thought the oil industry had not been assertive enough on climate, former UK negotiator John Ashton commented that it was a bit like a fish complaining the ocean isn’t wet enough.

In reality, these companies bear much of the responsibility for the lack of climate action these last eighteen years. And they are unavoidably part of the problem, not the solution: unless they all turned up tomorrow and announced a plan to immediately stop exploration and wind down their production, everything else is a smokescreen.

The climate can’t handle the carbon that is already at our fingertips, let alone the vast untapped resources that fossil fuel companies are spending billions looking for (think Shell in the Arctic). In fact, over 70% of the oil, coal and gas that we already have access to must stay in the ground if we are going to avoid the worst of dangerous climate change.

Perhaps last week’s letter is a survival strategy for the companies. But their survival means casualties: the climate, billions of livelihoods, and millions of lives as climate impacts continue to hammer the world’s most vulnerable populations.

Letting Big Oil have a central role in climate talks is like letting Big Tobacco play a key part at a conference on how to quit smoking. It is not only nonsensical – it is dangerous.

The fossil fuel industry’s only concern is to protect their profits, plain and simple. But when an industry’s profits come from the very thing we’re trying to avoid — burning the planet — it should have no place in shaping policy. The only reason our governments continue to irrationally subsidize fossil fuels despite the fact that we already have far more than we can afford to burn is because of the massive influence of this dirty industry. We urgently need to stop funding fossils and get on with our transition to a safe climate future. Big Oil and its friends need to get out of the way.