As Kinder Morgan and Imperial Oil together opened the third tar sands unit train loading terminal in the Edmonton/Hardisty area, the business of sending tar sands crude to market by rail hit the skids.

Genscape monitors each of the three terminals and the latest figures show that two of the terminals loaded no crude whatsoever for a week, while the third loaded on only three out of seven days.

The three terminals have a combined rated loading capacity of 430,000 barrels per day (bpd) but only managed to load an average of 75,000 bpd between them over the past four weeks (see Table 1 and Figure 1).  This is about 17% of their combined capacity and equivalent to about 1.1 unit trains per day between them.[1] 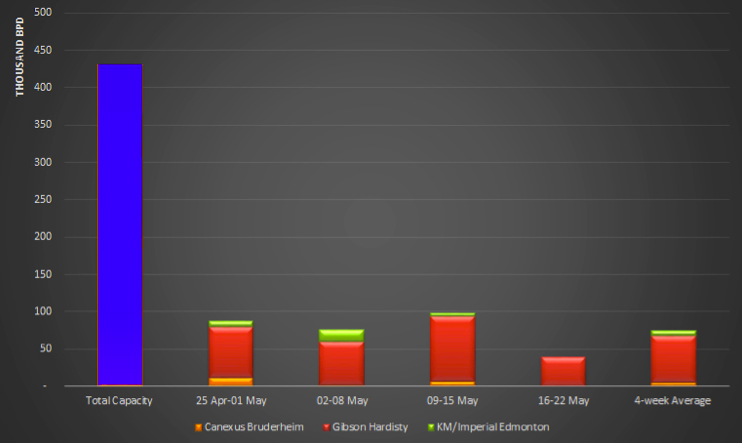 The low rates of utilization may come as a surprise to those that have heard so much about rail offering a solution to pipeline delays. However, we have extensively documented the problems with tar sands going by rail as well as the ongoing issues at the first tar sands unit train loading terminal, Canexus Bruderheim.

The current dive in utilization at these terminals is most likely linked to the lack of profitability in sending tar sands by rail when oil prices are low and the price differential between Canadian and U.S. crudes is narrow. Both of those factors are currently in play.

Loadings may pick up when prices rise and/or the differential widens again, but this merely confirms the stopgap status of crude-by-rail for tar sands producers. When the price differential widens it supports rail use because the extra cost of using rail is absorbed into the price the crude fetches at the destination. However, that does little to improve the netback (profit) for tar sands producers who will either have to sell at the loading end at a discount or pay the high cost of rail to sell at the destination and realize the higher price.

As the CEO of Imperial said when he announced the opening of the latest tar sands unit train terminal in Edmonton, “the jury is still out” on how much tar sands crude rail will ship by rail. If recent weeks are anything to judge by, the jury may have an answer.