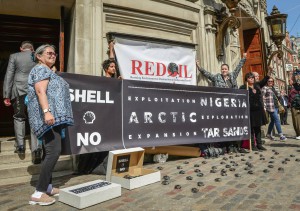 One of the banners which protesters unfurled outside Shell’s AGM last week highlighted three of Shell’s most contentious issues of the moment: Exploitation in Nigeria: Arctic exploration and expansion of the tar sands.

There is one of Shell’s most senior executives who has been in charge of two out of three of these: Ann Pickard, who currently heads the oil giant’s Arctic drilling program.

Once described by Fortune magazine as the “bravest woman in oil”, Pickard used to manage Shell’s highly controversial operations in Nigeria, before then moving to Australia. Due to retire, she was coaxed by the company to take up the poisoned chalice of Shell’s Arctic drilling operations.

As one of the most senior women in the oil industry, Pickard is used to close scrutiny and attention. The fact that she previously worked in Nigeria will be seen by many in the industry as proof that she has handle tough assignments.

It will be seen by her critics as proof that she has been complicit in Shell’s appalling record in the region of routine pollution, indifference to rampant poverty and complicity in violence.

They would argue that this does not bode well for the Arctic at all.

Indeed, Pickard drew international condemnation after Wikileaks revealed the details of one US diplomatic dispatch in which Pickard, then in Nigeria, confirmed what Shell had long denied that it had high level access and influence within the Nigerian government. She said that: “Shell had seconded people to all the relevant ministries and that Shell consequently had access to everything that was being done in those ministries.”

Since 2013, Pickard has been in charge of Shell’s Arctic operations, which are now subject to daily protests in Seattle as the oil giant readies itself for possible drilling this summer.

The latest protest involved two activists chaining themselves to the anchor chain of Shell’s support ship, the Arctic Challenger, over the weekend. One of them, student  Chiara D’Angelo was lowered down yesterday. A second protester, Matt Fuller, was taken down on Sunday.

Speaking whilst still attached to the chain, Fuller called Shell’s plans “an affront to our planet and to our society and especially to the indigenous populations up in Alaska who rely on the fish for their subsistence and economic wellbeing”.

And here comes the complete disconnect. We know – and Ann Pickard must know – that there is no way Shell can ever adequately clean up an oil spill in the Arctic. Even Shell’s own documents tell us that.

We also know that we cannot afford to burn any oil from the Arctic region if we are going to keep global warming to manageable levels. If Ann Pickard has any understanding of climate science, she must know that too.

But Pickard is trying to spin it differently, even though she must know differently. In an interview in today’s Financial Times she tells the paper that she believes it is entirely possible to drill safely in the Arctic. “We can do this”, she tells the paper. “I have put a lot of effort into getting this stuff right”.

It is also wrong for Shell’s shareholders too.

Elsewhere in the FT, Shell admits that the reserves in the Arctic may not be brought on-stream until the 2030s. So the company is spending billions betting it can burn those reserves, despite the fact that by then governments may have taken international action, essentially keeping those reserves in the ground.

That is a huge risk and one millions of people believe is not worth taking. It is also one that Ann Pickard and Shell have to understand, before it is too late.