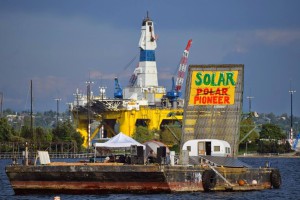 s I write, Shell’s AGM is underway in the Dutch city of the Hague, where the company is facing intense criticism about its strategy to address climate change, its highly risky Arctic drilling and its carbon-intensive tar sands operations.

Despite the protests, though, many delegates attending this morning’s meeting will not be concerned about climate change at all, but will be more worried about how the plunging oil price is affecting Shell’s long term financial viability and its ability to pay its dividend.

No doubt many would be concerned by today’s Financial Times whose headline reads “oil slide puts more than $100 billion of projects on ice as majors retreat.”

The paper employed consultants, Rystad Energy, from Norway, to examine the extent of the cut-backs on capital spending due to the oil price plunge.

What is interesting is that the majors are pulling back on many of the financially intensive projects in the Arctic, in the Canadian tar sands and in Australia. Indeed, the Financial Times notes that “Canada, Australia and Norway account for nearly three quarters of the total delayed capital spending that Rystad has identified.”

The carbon intensive tar sands in Canada have taken a particular battering. In Canada, some nine tar sands projects – ranging from $1 billion to $10 billion – have been scaled back.

The paper quotes Alastair Syme, an analyst at Citigroup who argues: “The particular area that is suffering is western Canada, where some $34 billion in investment has been curtailed. It is one area of the world outside US shale where companies are actually stopping investment in train”.

Shell, for example, ditched plans in February this year for a 200,000 barrels-a-day project in Pierre River. The oil giant has also delayed another tar sands project – the Carmon Creek – by a couple of years.

Australia too has taken a battering, with just under $30 billion of investment delayed or abandoned. Indeed, the largest single project to be scrapped is Shell’s $20-billion Arrow liquefied natural gas project in Australia. Investment in the Norwegian Arctic has also been scaled back by some $19.3 billion.

So here comes the interesting question: given that the oil majors are pulling back in expensive, risky projects in Canada, Australia and the Norwegian Arctic – why is Shell pressing ahead with risky drilling in the US Arctic?

As I blogged yesterday, the Arctic is rapidly becoming the company’s 21st Century’s corporate crisis in terms of negative publicity and protests.

But the oil giant feels it has no option not to go into the Arctic. The New York Times has an informative piece, entitled: “Shell Oil’s Cold Calculations for a Warming World”, written by McKenzie Funk.

It includes an analysis of Shell’s future scenario planning strategy, which gives an insight into Shell’s internal corporate thinking, basically into the heart of Shell’s brain.

As Funk outlines, in Shell’s world: “Drilling the Chukchi is not a choice, say the adults in the room; it’s an inevitability.” The Chukchi could contain over 15 billion barrels of undiscovered recoverable oil, which is second only to the central Gulf of Mexico.

Shell is only drilling in the Arctic as the Obama administration has given them permission. Funk, like many others before him, points out the fundamental contradictions of Obama’s position – on the one hand saying he wants a positive climate legacy and delaying the controversial KXL and then on the other opening up all the non-burnable carbon in the Arctic.

As Funk points out Shell employs brilliant minds to predict the future and guide the company. So the challenge for all of us who do not agree with the company’s strategy is to try and re-wire the company’s brain. To convince the company that there are other options apart from drilling in the Arctic.

We have to convince the oil giant that a strategy of risking the future of our planet by rushing into the Arctic and burning carbon we cannot afford to burn is fundamentally flawed. The company will spend billions exploring for oil it could never burn: they could become the most expensive stranded assets ever.

We have to convince the oil-men that the company’s future is beyond oil and that if they do not understand that then Shell has no future as a company. The Chukchi may contain 15 billion barrels of oil or 150 billion, in the end the numbers do not matter, because we as a society cannot afford to burn a single drop if we want a liveable planet for our children.

We have to also warn the company that its carefully crafted brand will be tarnished irrevocably by its Arctic actions. Nothing the company says or does can justify the risks of Arctic drilling. No numbers, no spread-sheets, no number crunching.

As the people of Seattle have shown over this last weekend, if Shell sets sail this summer for the Arctic and starts drilling, the oil giant is crossing the Rubicon of no return.

If only Shell could re-wire its brain to see that the future is anchored in Elliot Bay on a rental barge, not docked at Terminal 5 in a giant oil rig.