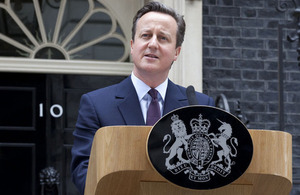 As the dust settles on the British General Election, many commentators have been analysing what the results mean for policies on energy, fracking and climate.

All the signs are that it is great news for frackers and bad news for the renewables industry, especially onshore wind companies.

As ever, there are clues in how the markets reacted in the immediate aftermath of the result: As the results became clear last Friday, the shares in Centrica, Britain’s largest gas and power supplier were one of the fastest growing stocks – up 6% in the early hours of trading. The shares in another major utility, SSE rose 4 % cent too.

But first of all lets look at the good news, if you could call it that. As one commentator in the Guardian newspaper pointed out, at the very least, those concerned about global warming “can take heart” from the fact that newly re-appointed Prime Minister, David Cameron, did not appoint a climate change sceptic as the head of the influential Department of Energy and Climate Change.

At least the new Secretary of State, Amber Rudd, argues that climate science is “compelling”, and is said to be concerned about global warming. She is said to be committed to securing a deal at the crucial United Nations’ climate change conference in Paris later this year.

But there the good news dries up quicker than a solar panel in the Sahara.

Initially in February this year the Government signalled that it would ban fracking in national parks, but then it did a U-turn, with Rudd at the forefront of the political about-turn.

She said at the time that “in the case of areas of outstanding natural beauty and national parks, given their size and dispersion, it might not be practical to guarantee that fracking will not take place under them in all cases without unduly constraining the industry.”

Rudd’s personal views fit well into the wider Tory view on fracking which is to kick-start the fledgling industry, despite increasing evidence of water and air pollution in the US.  With a new licensing round due within weeks, we can expect a full-scale frack attack in the UK.

The election result is also definitely bad news for the onshore wind industry. As energy specialists, Platts, noted the day after the election: “renewables companies will be disappointed by the new government’s proposed stance on onshore wind, one of the cheapest forms of green energy now available.”

The Tory manifesto pledged to “halt the spread of onshore wind farms”, leading to the head of the UK’s renewable energy sector to issue a “desperate plea” within 24 hours of the election result for the new Conservative government to not kill off the sector, leading to thousands of jobs losses.

“We urge the new administration to confirm the importance of onshore wind as an essential part of our electricity mix, as it is one of the most cost-effective ways to generate electricity, and is consistently supported by two-thirds of the public,” Maria McCaffery, RenewableUK chief executive said in a statement.

McCaffery is also likely to be concerned by the continued rise of Tory MPs such as Matt Hancock to the Cabinet Office – Hancock is now the new minister in charge of efficiency and civil service reform. He, like many in the Tory party, is an ardent critic of onshore wind.

Hancock was one of 101 Conservative MPs to sign a 2012 letter declaring that “in these financially straitened times, we think it is unwise to make consumers pay, through taxpayer subsidy, for inefficient and intermittent energy production that typifies onshore wind turbines”.

So with an overall majority, you can expect the Conservatives to go full speed for fracking and to rein in wind. They may also attack other subsidies for solar too.

One of the unknowns is whether the newly influential Scottish National Party will embrace fracking or not. Many of their supporters will be ardently opposed, but I suspect they will be deeply disappointed at their government’s implicit support for the controversial technology. But we will have to wait and see on that one.