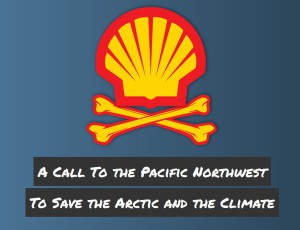 The groundswell of local opposition against Shell’s plans to drill in the Arctic continues to grow and will culminate this weekend in three days of protests and direct action.

The oil giant’s vast 400-foot long rig, the Polar Pioneer, is currently heading to the Port of Seattle on its way to the Arctic, where Shell hopes to start exploratory drilling this summer.

Two weeks ago, over a thousand activists rallied in the city to say “Shell No!” to the oil giant’s Arctic plans and to protest against the city hosting the vast rig.

Greenpeace Executive Director Annie Leonard, who is from Seattle herself, told the crowd: “The last thing we need is more extraction, production, drilling and burning of fossil fuels. It is enough. We are drawing the line today.”

Last Monday, the oil giant was hit by a further set-back when the city’s mayor Ed Murray, declared that the Port of Seattle must apply for a new permit in order for Shell to use its facilities for the Polar Pioneer.

And now this Saturday, 16 May, the oil giant will be confronted by a “Mosquito fleet” of paddlers in Seattle who plan to protest against Shell’s Arctic plans. It will be the first of three days of action. On Saturday, the “sHellNo! Flotilla” in Elliot Bay aims to be a celebration of people and paddle power.

Organisers are planning to throw a “family-friendly protest party on the water” to protest against Shell’s plans, including music, art and entertainment.

The main protest will include hundreds of kayakers, known as “kayactivists” taking part. Organisers are hoping that 1000 kayaks and small boats will take to the water.

One local kayak guide, Amanda Lee, is joining the protest. “I’ve never been an activist type, but I’m concerned about climate change,” she said. With Shell using Seattle, Lee said, “It’s at our front doorstep. I care about the water and sea life.”

The protest is being dubbed the “Paddle in Seattle,” reminiscent of the 1999 anti-World Trade Organization protests which became known as the “Battle in Seattle.”

Activists have been preparing for days, with many taking to the water for the first time. One such person is Dr. Laura Byerly, a medical director near Portland, Oregon. Worried about climate change she said she was going from “inaction to action”.

Her friend, Ken Ward, who is driving three hours on Saturday with his boat to take part said doing nothing was no longer an option. He said simply: “Seattle’s fight is everyone’s fight.”

For more go to here or here.