The U.S. Energy Information Administration’s (EIA) annual flagship report, the Annual Energy Outlook (AEO) 2015 was published April 14 and launched with a presentation at the Center for Strategic & International Studies (CSIS). The brief discussion of CO2 emissions by EIA Administrator Adam Sieminski exposed just how blind the EIA currently is toward crucial climate goals.

Within the presentation was a chart of U.S. energy related CO2 emissions trajectories, which corresponds to Figure 36 in the AEO report (See Figure 1). The chart presents four trajectories for U.S. emissions: High Economic Growth, High Oil and Gas Resource, Reference, and Low Economic Growth. But in none of the scenarios presented does the EIA consider the U.S. and global goal of staying below a 2 degree C temperature rise.

Reference Case, which assumes current regulations remain unchanged, shows none of the U.S. emissions decline needed to meet climate goals. The High Economic Growth case would lead to emissions growth, as would the High Oil and Gas Resource base. Only the Low Economic Growth case shows a reduction in emissions, and not only is it also not on track with a 2 degree scenario, but the presentation of low economic growth as the only path to emissions reduction does a disservice to the opportunities a low carbon economy offers the U.S. economy.  To be clear, there are many paths to meet our emission goals that result in higher economic growth.

Obviously, the AEO’s Reference Case is designed to reflect current laws and regulations, and the fact that emissions would more or less plateau under these policies signals a reduction in carbon intensity in the U.S. economy. However, the absence of any reference to how this compares to where the U.S. needs to be to ensure a safe climate – and how it might reach those goals without sacrificing economic growth – is simply absurd.

This is particularly disturbing in a year when climate is close to the top of the Administration’s agenda in the lead up to the Paris climate negotiations in December. In fact, with the U.S. submission of its Intended Nationally Determined Contribution (INDC), the EIA has a basis upon which to model a ‘climate scenario’ for the U.S. economy.  The INDC is targeting a 26-28% reduction below 2005 emissions levels by 2025 and an 80% reduction by 2050. That is a long way off from the 8% reduction in 2025 shown in the EIA’s Reference Case or the 12% reduction by 2025 in the Low Economic Growth scenario (see Figure 1). Further, in the Reference Case, emissions are higher in 2040 than they are in 2025, with emissions only 7.5% below 2005 in 2040 when emissions should be down by at least 80% by 2050!

The AEO states that the Reference Case does not include the proposed Clean Power Plan. We contacted the EIA to see if they had any plan to model the impact of this central pillar in the Administration’s current climate policy, and we were told that they are indeed working on this and intend to publish the analysis in June.

In the meantime, we put together the chart that should have been in the AEO 2015. This shows projected U.S. CO2 emissions in the EIA Reference Case against both the trajectory of the INDC and the IEA’s 450 Scenario, which gives a 50% chance of reaching the 2 degree goal. This at least provides a reference for how America’s current policies are doing against both the Administration’s stated goal and the wider 2 degree goal. It also shows that the current trajectory of U.S. emissions is in line with a 6 degree climate that would be beyond catastrophic. 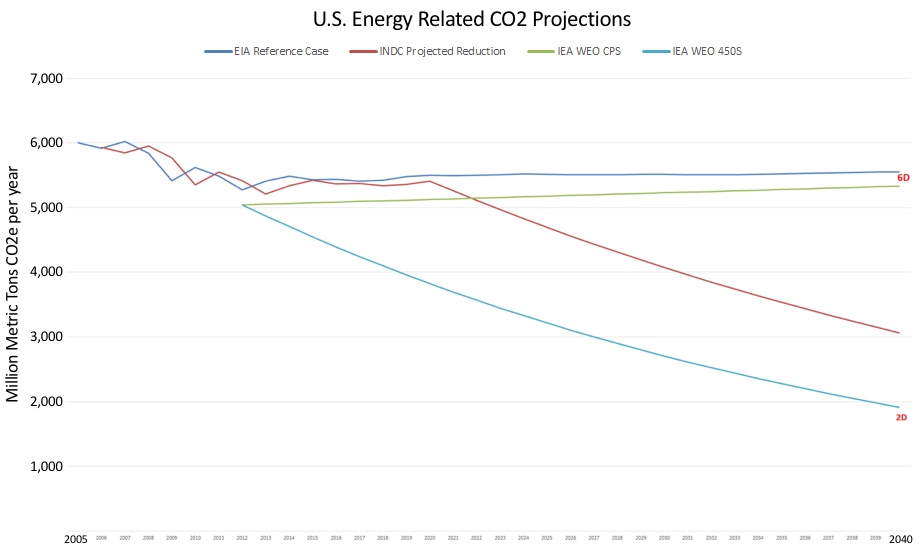 * For the purposes of this analysis, we are not incorporating emissions from all fuels produced in the United States, only those consumed here.