From the minute it was exposed that Shell’s Arctic Drilling Fleet had been issued a permit to be based in Seattle, we knew it wouldn’t be that simple. And within days, concerned citizens had mobilized; packing Port Commission meetings, organizing rallies, and demanding more from municipal leaders who had campaigned on making Seattle an environmental leader at the forefront of the fight against clim 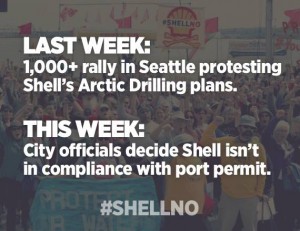 And the organizing has paid off.

A week after the biggest Arctic-related rally in Seattle yet, Mayor Edward Murray has thrown a significant hurdle in front of Shell’s plans to drill in the Arctic this summer. The mayor announced yesterday at Climate Solutions’ Annual #ClimateChampions Breakfast that leasing Terminal 5 to Shell’s Arctic Drilling fleet violated the port’s shoreline permit. This means that Shell’s Arctic fleet will have to file for a new permit, which gives the Port Commission the opportunity to reconsider and reject the lease following incredible push back and resistance from the citizens of Seattle.

In further comments at the event, Mayor Murray had some compelling things to say about why he believes this is a critical moment for Seattle:

“[giving the Port an opportunity to rethink the issue] is an opportunity, I believe, for the Port and all of us to make a bold statement about how oil companies contribute to climate change, oil spills and other environmental disasters and reject this short-term lease.”… “To prevent the full force of climate change, we need to not continue with the past. It is time to turn the page. Things like oil trains and coal trains and oil-drilling rigs are the past. It’s time to focus on the economy of the future. Clean energy, electric cars and transit, green homes and an environmentally progressive business community.”

These are the types of statements we should be hearing from our political leaders if we are serious about confronting the challenges of climate change head on!

Like President Obama’s climate test for the Keystone XL pipeline, Mayor Murray is considering Shell’s drilling infrastructure the same way: we have to look at the full picture. Infrastructure and pipelines enable fossil fuel expansion and drive growing emissions.

In this case, Shell wants to take another shot at looking for oil in the U.S. offshore Arctic Ocean. In a world where we know that the vast majority of the fossil fuels we already know about have to stay in the ground, this truly is a high-risk hunt for unburnable carbon. On top of this, Shell is woefully unprepared to deal with a spill in the Arctic Ocean, a pretty big problem — especially when the government’s own estimates show a 75% chance of a major spill if Shell drills.

So now Shell’s drilling fleet must apply for a new permit, and citizens of Seattle are asking for a public meeting of the Port Commission to determine next steps. This process will take time, which is the limiting factor for Shell which will only have a narrow window of opportunity to prepare its fleet in order to make it to the Arctic in time for the short summer drilling season. In other words – the delay might kill Shell’s hopes to risk it all in the U.S. Arctic Ocean this summer.

The Port Commission now has a second chance to do the right thing and outright reject the lease. Seattle does not want to enable reckless fossil fuel expansion and climate change, and that is exactly what this lease does. Big Oil needs to get a clear message that fossil fuel expansion is no longer the name of the game. The future of energy isn’t in last century’s high carbon oil, coal and gas – it is in clean and safe renewable energy, electrification of transportation, and efficiency.

Seattle has committed to being at the forefront of a clean and safe energy future, and the Mayor knows that this vision is irreconcilable with allowing Shell’s Arctic fleet to call the city home.

Our job now is to support Seattle in urging the Port Commission to reject the lease. You can send the Commissioners a message here – lets make sure they know that concerned citizens across the continent are looking to them to do the right thing for the climate and the arctic.

And to Seattle: keep organizing! This victory belongs to people power!