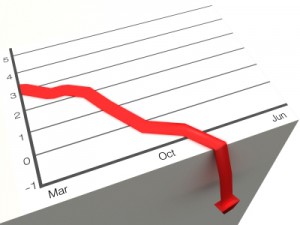 Amidst the crumbling edifice of the tar sands sector – brought about by the combination of falling oil prices and strengthening opposition to pipelines that would open new markets to the world’s dirtiest oil – is a proposed tar sands mine that defines a bad investment: the Teck Frontier project.

For many of us, the wanton destruction of open cast mining for oil that we can’t afford to burn within a sane carbon budget is a bad idea to begin with. Not to mention that the area Canadian mining company Teck proposes to mine with its Frontier project lies north of the Firebag River, territory of the Athabascan Chipewyan First Nation, which they have declared off limits to tar sands development.

So there are very clear environmental and social justice reasons to not go ahead with a project that would potentially extract billions of barrels of high carbon bitumen and could ultimately destroy 30,000 hectares of boreal forest and muskeg – land that First Nations have built their lives and livelihoods around for centuries.

But there’s money to be made, right?

Actually, when it comes to the Teck Frontier mine, no.

There may be billions of dollars to be spent constructing and operating this giant boondoggle and for sure engineers, construction companies, steelmakers, cement pourers and all the various service companies, equipment providers and technical consultants would make some money. But will Teck make a profit on this huge investment of capital?

According to data from Rystad Energy’s UCube database of global oil and gas projects, the Teck Frontier mine is an noncommercial project that would require oil prices to remain above $140 per barrel in today’s money.

We downloaded the data and modeled the project’s initial first phase to illustrate the project’s cash flow shown in the chart below.  This illustrates how the project will destroy value to the tune of hundreds of millions of dollars a year at Rystad’s current oil price forecast. 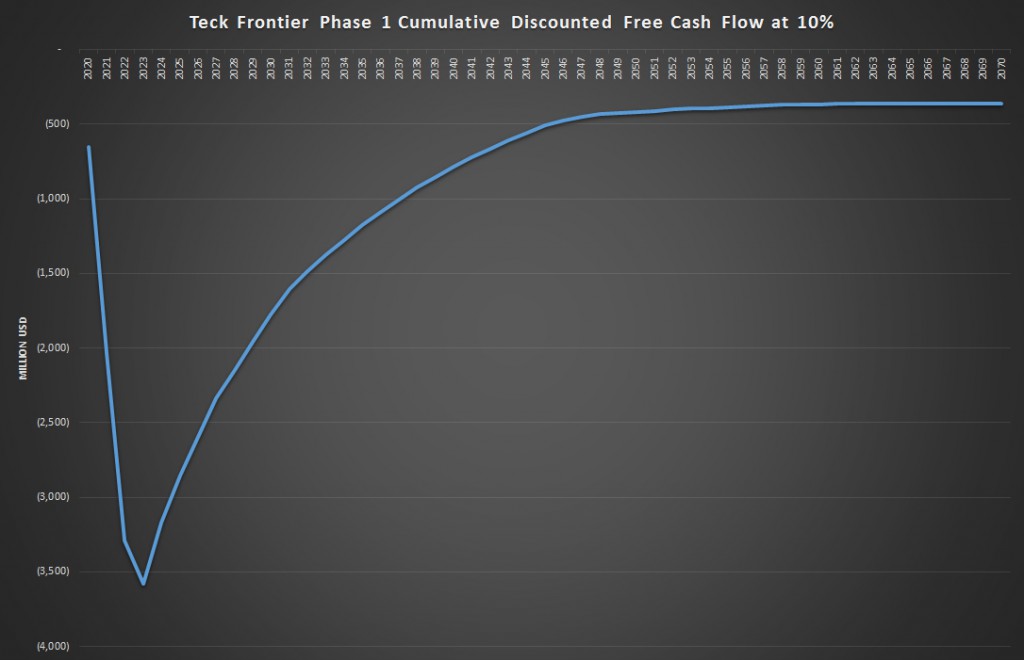 The project exemplifies a sector that is mired in high costs and poor returns due to a number of factors. Tar sands mines require a lot of capital to build infrastructure to extract and process the bitumen in a remote corner of Alberta. The market for everything from labor to cement is inflated due to the remote location. The high environmental impact of extracting energy from the tar sands has also placed an additional burden onto the sector in the form of increasing opposition to pipelines that would carry the product to market and thereby enable further extraction. Whether these proposed pipelines aim west or east through Canada, or south to the Gulf Coast via the seemingly doomed Keystone XL pipeline, this much needed new market access is being delayed or denied across the continent.

This is raising the risk  of building new projects and leading to project delays and cancellations. On top of the decline in oil price outlook brought about rising tight oil production and a new Saudi strategy to retain market share over price, the outlook for capital intensive tar sands projects is getting grimmer by the day.

This can only be good news for the climate as the more carbon we can keep in the ground the better chance we have of meeting the imperative climate goal of containing average global warming to below 2 degrees Celsius.

The Teck Frontier project first filed for regulatory approval in late 2011 and the process is expected to move to a public hearing in the latter half of this year. Meanwhile, Teck has been drilling exploratory wells on the lease in order to assess the quality of the resource. Teck has given no indication that it is concerned about the poor economics of the project and appears to be persevering with the regulatory process.

There may be several reasons for this persistence. The regulatory process is a relatively minor cost and there is likely little to lose by staying the course with it, not least because the Albertan government is yet to deny a single tar sands project permit. A project with poor economics is just that little bit more viable with a permit in hand.

Most likely Teck, which has no firsthand experience of operating a tar sands mine, is gambling that in the five to ten years between now and the project potentially breaking ground some combination of higher oil prices and innovations to reduce construction and operating costs might occur.

No one can predict the future but from today’s standpoint, there would have to be some really substantial changes for this project’s economics to turn positive.

The poor prospects for Teck’s tar sands endeavors is the subject of a report published today by the Institute for Energy Economics and Financial Analysis. It is published just ahead of the company’s Annual General Meeting in Vancouver, BC tomorrow.

Teck’s shareholders would do well to take heed of the report’s findings and realize, as many of us already do, that another giant tar sands mine makes no sense.