The agency’s data confirms that very little Canadian crude of any kind is getting to the Gulf Coast via rail, critically undermining industry’s argument that tar sands will get to the Gulf Coast with or without Keystone XL.  According to EIA, direct oil rail shipments from Canada to the Gulf Coast averaged a mere 36,000 bpd in 2014 (3.6% of North America’s crude-by-rail traffic).

It has taken years for the tar sands-by-rail exports to reach this level –far below the scale of Keystone XL’s 830,000 bpd of pipeline capacity. Not only has the long predicted tar sands-by-rail boom failed to materialize, the rail companies and tar sands producers responsible for the limited volumes moving today are facing severe economic difficulties and in some cases, bankruptcy. Events have clearly upheld the argument that Keystone XL would enable a substantial expansion of tar sands production and significantly increase carbon pollution.

EIA’s data debunks two central arguments made by Keystone XL’s proponents, who have contended for years that:

1)      Keystone XL will solve the safety issues arising from the poorly regulated crude-by-rail boom and;

2)       That we should ignore the pipeline’s significant climate impacts because tar sands crude oil will get to the Gulf with or without Keystone XL.

The data clearly disproves both of these contentions, showing that the vast majority of North America’s crude-by-rail traffic is light crude heading toward the East and West Coasts. There’s no getting around the fact that Keystone XL decision isn’t a choice between pipeline or rail; it’s a choice between expanding long term production of the most damaging, carbon intensive oil in the world and transitioning to cleaner, sustainable forms of energy.

What does the EIA data say?

The EIA published data on North American crude-by-rail volumes for the first time in late-March. The data goes back to January 2010 and is currently updated to January 2015. The figures will be updated monthly. The data covers domestic U.S. shipments as well as exports and imports by rail to and from Canada.

The data shows that the vast majority of North American crude-by-rail still comes from North Dakota and that the key destination for both U.S. and Canadian crude travelling by rail is in fact the East Coast and not the Gulf Coast (see Figure 1). Only 36,000 bpd made it to the Gulf Coast in 2014 from Canada via rail. Including rail shipments to the Midwest that are subsequently transferred to Mississippi barges for onward delivery to Louisiana, the figure is still a paltry 49,000 bpd (as a point of reference, the State Department forecast that tar sands by rail to the Gulf would exceed 200,000 bpd by the end of 2013). 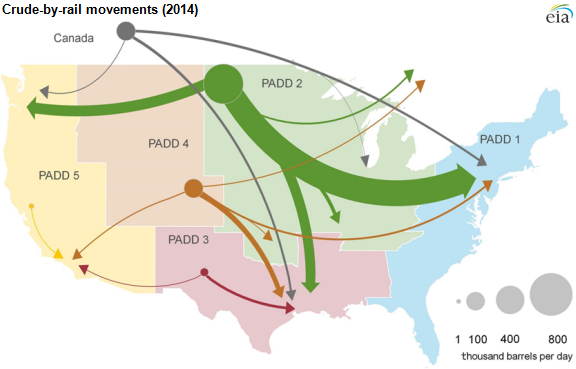 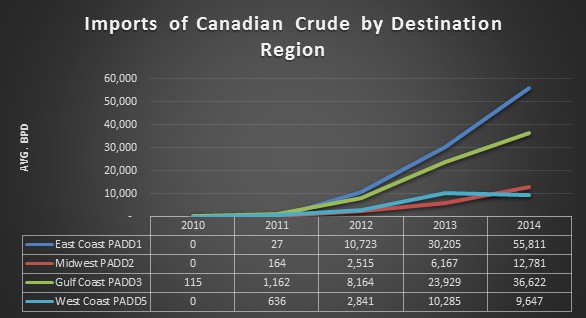 The data substantially contradicts recent estimates made by industry consultancy IHS in a February 2015 report that stated: western Canadian crude-by-rail exports to the United States averaged around 200,000 b/d last year, a figure that will likely increase to 400,000 b/d in 2015. IHS expects most of these crude-by-rail exports will be directed to the USGC [US Gulf Coast] market.

While the 2014 figure was clearly inflated, the forecast for 2015 now appears highly optimistic at best. The ongoing low oil price environment has severely dented the prospects for Canadian crude-by-rail and several key players in the Canadian industry have stated their reticence regarding the trade in recent months.

Before the oil price crash moving tar sands by rail was already performing below the expectations of some of the industry’s vocal supporters. New terminals designed to offer the economy-of-scale offered by unit trains were severely under-performing. Unit trains are trains that carry a single commodity from source to destination as opposed to ‘manifest rail’ which involves loading a smaller number of cars that are then added to a train carrying goods from other sources.  Manifest rail costs more and takes longer. Unit trains may be up to 120 cars carrying over 3.5 million gallons of crude oil.

The first unit train loading terminal with access to tar sands crude has performed so badly that is was put up for sale within 9 months of beginning operations, and 6 months later it is yet to find a buyer and is cutting its workforce.  The Canexus Bruderheim terminal, near Edmonton Alberta, has underperformed from its beginning in December 2013.  Its full available capacity is around 100,000 bpd but it has only occasionally topped 30% of that (see Figure 3).  Capacity was expanded from 70,000 bpd following a 3-month shut down but throughput hardly increased and was most recently at 12,000 bpd.

A second unit train terminal opened in Hardisty in the summer of 2014 with 120,000 bpd capacity. It initially performed better but in recent weeks its throughput has fallen off a cliff (Figure 4).

As oil prices dropped in late 2014, the narrow margins of Canadian crude-by-rail became untenable. Tar sands shippers ceased shipping to the Gulf Coast entirely and were faced with choosing destinations that offered the lowest losses.

Glen Perry, vice president of marketing at Grizzly Oil Sands, told Reuters that “netbacks on crude-by-rail were “horrible” and “We would lose money going anywhere (by rail), so the question is where do we lose the least amount,”.

Reuters also reported that Canada’s largest producer, Suncor Energy, “no longer ships crude by rail from northern Alberta to the U.S. Gulf Coast” and that the company’s Chief Executive Steve Williams had stated in February that “(t)he journey is no longer economic.”

The decline in activity at the leading tar sands unit train terminals and these statements from key tar sands rail shippers and railways suggest that when EIA data for February, March and April is released over the next few months we will likely see even lower numbers for Canadian crude railed to the Gulf Coast than we saw in 2014.  It also indicates that IHS’s forecast of 400,000 bpd for Canadian crude-by-rail in 2015 will turn out to be spectacularly wrong.

It is time to abandon the argument that tar sands expansion is an inevitable activity that is unaffected by decisions around major pieces of infrastructure like Keystone XL. The tar sands industry does not believe that argument and the facts on the ground do not support it. Nor will it address the real dangers of an unregulated crude by rail boom.

Proponents of Keystone XL must face the reality that their project would enable the expansion of the tar sands – the exploitation of which is inconsistent with global efforts to limit climate change to two degrees Celsius.