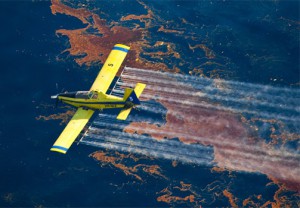 In the desperately dark days following BP’s Deepwater Horizon accident in April 2010, one of the issues that I highlighted on this blog was the dangers of BP’s chemical Corexit, which the oil giant was using to disperse the oil.

In a blog on in early May that year, we published a blog: “Exclusive: No Toxicity Tests on BP’s Dispersant”, which examined the lack of safety data on the dispersant that BP was pumping into the Gulf in vast quantities.

The bottom line is that there is no way Corexit should ever have been used to disperse the oil.

I wrote simply that: “Alarmingly, according to the dispersant manufacturer, no toxicity tests have been conducted on this product.”

I was not alone in being worried. At the time a group of scientists were warning against the widespread use of Corexit. One of those was the veteran of the Exxon Valdez oil spill, Dr. Riki Ott, one of the world’s leading experts on oil spills.

Five years later, I am sad to say our collective concerns look like they are going to be proved right.  According to the Washington Post yesterday: “a new study by researchers at the University of Alabama at Birmingham suggests that an oil dispersant widely used during the cleanup of the BP disaster is capable of causing damage to humans and marine animals alike.”

The paper reports how the “Thousands of men and women who had helped clean up the spill gradually became ill. Lungs began to burn. Skin began to blister.”

Corexit is to blame. As the Post outlines: “Nearly two million gallons of Corexit were sprayed atop the oil spill to help break down the petroleum … in their study, the UAB scientists found that the dispersant can seriously damage epithelial cells, such as those in the lungs of humans or the gills of marine animals.”

“There were some 48,000 workers involved in the cleanup operations, and it is possible that workers were exposed to Corexit via inhalation,” Professor Antony adds: “Cough, shortness of breath and sputum production were among symptoms expressed by workers.”

The scientific survey by UAB is the first of many studies that are due to be published in the run up to the fifth anniversary of the spill on 20th April 2015. It is likely they will outline a region still suffering from the spill, despite the hype and spin from BP that everything has recovered.

At the end of last month, the National Wildlife Federation published a report which examined how 20 species have faired since the spill.

Again it is bad news. Dolphins in Louisiana were found dead at four times historic rates in 2014, and there is increasing evidence that these ongoing deaths are connected to the oil spill. Other species – such as sea turtles, pelicans and fish, such as Bluefin and yellowfin tuna – also suffered.

And so to go back to the past. In 2013, I wrote a further blog on Corexit after the American Journal of Medicine published another scientific study which revealed that workers exposed to crude oil and dispersants used during the BP cleanup displayed significantly altered blood profiles, liver enzymes, and bodily illnesses compared to an unexposed control group.

I wrote: “As BP’s workers slowly get sick, develop cancer and die, the most unpalatable and outrageous fact is that all this suffering and injury was preventable. The oil industry knew how toxic crude oil was and knew how toxic Corexit was. In the days after the disaster, The Exxon Valdez veterans, like Riki Ott,  pleaded that BP and the authorities learn from the lesson from Alaska. But their warnings were tragically ignored.”

As the evidence of Corexit’s toxicity becomes clearer and clearer, surely someone from BP should be held responsible for authorising this chemical to be used in the first place.