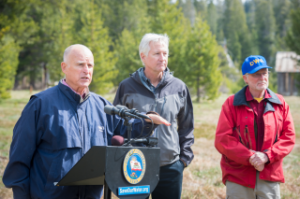 The headlines reported how this was the first time in California’s history that such drastic measures had been introduced. And here was a Governor who was prepared to tackle the devastating four-year drought head on.

It was all very choreographed. Brown’s press conference took place on a barren, brown slope in the Sierra Nevada mountains, where snow fall is a record low levels.

And it is not just the snow which has gone. The whole state is in the middle of its worst drought for centuries. There is no end in sight, with scientists warning the region may be entering a “mega-drought” which could last for decades.

“Today, we are standing on dry grass where there should be five feet (1.5 meters) of snow,” Brown said. “This historic drought demands unprecedented action …  As Californians, we must pull together and save water in every way possible.”

What Brown proposed was unprecedented, in that he was attempting to reduce water usage across urban California by twenty five per cent.

But his plan is flawed in that it does not “save water in every way possible”. The main focus of Brown’s water reduction plan is to reduce urban water usage. He did not mention the state’s guzzling fracking industry and the even more water-hungry agricultural sector.

There have been repeated calls to tackling fracking’s vast consumption of water for months now.

Back in February last year, one Californian state assemblyman Marc Levine attempted to push through a Bill that would have placed a moratorium on fracking in the state. He said at the time “The drought is a game changer on fracking. We have to decide what our most precious commodity is – water or oil? This is the year to make the case that it’s water.”

You can see why he was so concerned. The Californian fracking industry used 70 million gallons of water last year, according to state officials.

Brown’s omission of the fracking industry has been widely condemned. Adam Scow of Food and Water Watch replied simply by stating It is disturbing and irresponsible that the Brown administration continues to allow oil companies to contaminate and rob Californians of these fresh water sources.”

And the situation looks set to get worse too, due to climate change.

Last week, the “Risky Business” project, which aims to quantify the risk of climate change, issued a report on the threat to California from global warming. It makes grim reading.

The report warns that the state “could face significant disruptions to its water supply, agricultural productivity, and coastal infrastructure unless businesses and policymakers take immediate action to address climate change.”

The report predicts that summers in California by the end of the century will likely be hotter than in Texas and Louisiana today, and the average number of extremely hot days—with temperatures above 95°F—will likely double or even triple.

Meanwhile the number of heat-related deaths is predicted to double and the amount of coastal property below sea-level is valued at nearly $20 billion. It goes without saying that there will be less snowfall too. Only by taking urgent action now, the report argues, can we potentially avoid the worst excesses of climate change.

One action Brown could take is to ban fracking in the state immediately. That would be a great start to fight climate change and conserve California’s fast dwindling water.