Many capital-intensive project proposals have been shuffled to the back burner as the oil industry grapples with cutting costs in the current low price environment. For the most part, companies have tended to shelve projects on the high cost frontiers – with the exception of Royal Dutch Shell, which has doubled down on its efforts to drill in the U.S. Arctic Ocean this summer.

As seen in the graph below, Oil Change International has analyzed the exploration expenditures of the global oil majors and found that Shell has consistently outspent its peers looking to expand its reserves, but has yet to drill a complete well in the U.S. Arctic Ocean. Its Arctic program has been dominated by missteps, errors, and failing equipment, and yet Shell has said it will drill there again in 2015, at a cost of at least $1 billion (if it can get regulatory approval). 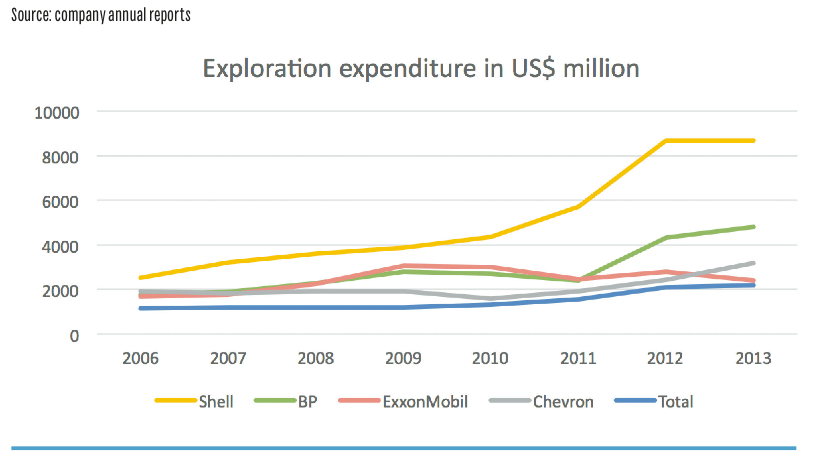 The offshore Arctic is often referenced as the poster child for high-cost, high-risk oil. Logistical challenges dominate on the short-term horizon, but longer-term, these projects are also at the highest risk of becoming stranded assets in a carbon-constrained world.

Shell is also positioned to become the target of an increasingly pointed campaign to keep the company out of the Arctic. Analysis by the Institute for Energy Economics and Financial Analysis (IEFFA) and OCI has shown that public opposition campaigns have had significant material costs for the fossil fuel industry using the tar sands as a case study ($17 billion between 2010 and 2013).

It is clear that Shell could face similar public concern, pressure, and ultimately delay. This is especially notable in the fierce opposition the company is facing following the announcement in February that it will base its drilling fleet in the Port of Seattle. Public outcry has been swift and the lease is already facing legal and public resistance.

The company remains dependent on approvals from the U.S. administration for an extension of its Arctic lease (Lease 193), which moved forward with the Department of Interior’s “record of decision” earlier this week. This is good news for Shell, but is far from the last step in the regulatory process and it can add mounting and committed resistance in Seattle to its growing list of project risks.