In light of these trends, the EIA released data suggesting a production decline in some shale plays may be imminent. The March EIA monthly Drilling Productivity Report found that while increasing productivity at tight oil wells has offset production losses from the drilling decline to date, the impact of rig shutdowns may finally catch up in some areas by April. It estimates that production in the Eagle Ford, Bakken, and Niobrara regions will fall by a combined 24,000 barrels per day in April, while production in other shale plays will continue to rise, led by the Permian in Texas (Figure 2). 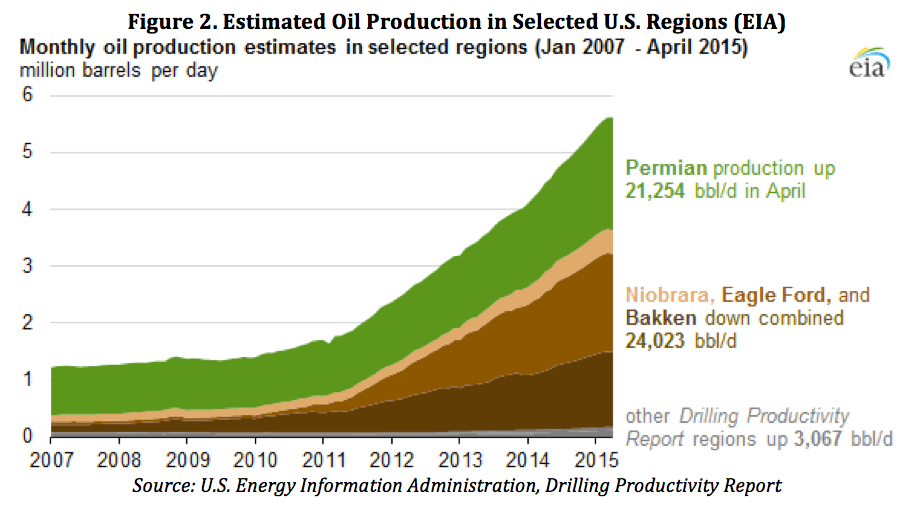 The EIA report will feed into ongoing debate about whether and when U.S. production may go into decline in response to the fall in oil prices since June 2014. Mark Lewis at Kepler Cheuvreux expects that U.S. oil production will level out in mid-2015. Other commentators and analysts predict that improved well management and increased concentration in the more productive wells will yield productivity gains that may continue to offset the decline in the number of operational rigs.

In some regions, a “fracklog” has developed, meaning that companies are holding back on fracking already-drilled holes to begin oil production when either prices or tax terms improve. In North Dakota for example, many producers are anticipating the start of a two-year tax break that will be triggered if the WTI oil price remains below $55.09 for five consecutive months. The tax break is expected to go into effect in June and will exempt producers from the state’s 6.5% oil extraction tax.  Analysts predict a surge in North Dakotan crude production when the tax break is implemented, possibly clearing the state’s “fracklog”. This is a prime example of how production and exploration subsidies trigger additional production, and additional carbon. OCI will be producing more data and analysis on this in coming months.

[1] The number of operational oil and gas rigs in key oil-producing shale plays – Permian, Eagle Ford, Williston Basin (including the Bakken), and Niobrara – have now fallen by 35% to 52% since October 2015.