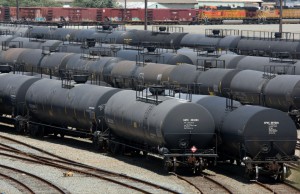 For decades critics of the oil industry have argued that the industry has a latent disregard for the safety of its workers and the communities in which it operates.

The spectacular disasters we have witnessed over the years – from Piper Alpha, to Exxon Valdez and Deepwater Horizon – often hide the routine spills and accidents that never make the news.

But now we have a new threat to communities across North America and that comes from crude-by-rail trains.

In the last month we have witnessed a spate of accidents that has given a new urgency to the debate over the safety of moving millions of tonnes of volatile crude around North America’s creaking rail network.

As my colleague Lorne Stockman wrote last week: “The five major oil train derailments and explosions that occurred less than a month apart in the U.S. and Canada recently has refocused attention on the reckless practice of moving millions of gallons of crude oil at a time on a train through the continent’s communities.”

You would have thought that the oil industry would be reacting fast to the deteriorating safety situation by doing everything in its power to reassure communities from the barren Bakken shale fields to the affluent coastal communities that America’s railways are safe.

But you would be wrong. Despite the spate of recent accidents, the oil industry is lobbying against further safety measures.

The build-up of high vapor pressure has been identified as a possible factor in explosions in the recent crude-by-rail train derailments in Illinois and West Virginia.

For a while now US federal officials have been warning that crude from North Dakota’s Bakken shale oilfields contains a cocktail of explosive gas, which is known as ‘light ends.’

Tomorrow is the deadline for new regulations to cap vapor pressure in Bakken crude oil transported by rail.

According to Reuters the new rules, “aim to contain dangers by spot-checking the vapor pressure of crude before loading and capping it at 13.7 pounds per square inch (psi) – about normal atmospheric conditions.”

Many experts are warning that the new rules are actually inadequate as they fail to take into consideration how Bakken crude behaves in transit, as gas levels can increase during transportation.

This raises “doubts about whether the state’s much-anticipated rules will make oil train shipments safer”, argues Reuters. Indeed, checks have found that vapor pressure can increase from 9 psi to over 30 psi during transit, over twice the new limit.

The US National Transportation Safety Board, under pressure to make crude-by-rail shipments safer after a string of accidents, is also calling for a federal standard for “setting vapor pressure thresholds”.

Reuters reports how the API “is lobbying lawmakers to resist federal vapor pressure benchmarks and last week urged lawmakers to oppose ‘a national volatility standard.’” The API is arguing that this would add unnecessary expense to carrying crude by rail.

What this shows is that once again the oil industry is putting profits before people, and showing a deeply callous disregard for the safety of communities across North America who are close to railways.

And although we would expect the industry to be sociopathic, as it always has been and always will be, it also seems that the regulator is incapable of making crude by rail safe too.

So that is why we need a moratorium as soon as possible, before we have another accident.