TransCanada’s Keystone XL tar sands pipeline has been front and center in a heated continental energy and climate debate for over four years now – and President Obama is sounding more and more like he is poised to make the right decision and reject the pipeline that would carry high carbon, high risk, high cost bitumen through North America’s heartland.

As you probably can imagine, tar sands producers and shippers will not give up easily in their efforts to get Canadian oil to international markets – where they can make more money selling their oil.

TransCanada has recently proposed an even bigger pipeline called Energy East that would carry 1.1 million barrels of tar sands oil from Alberta, across all of central and Eastern Canada to Atlantic refineries and ports.

But opposition was fast and furious even before the proposal was filed late last year. Tar sands pipelines are simply not part of the energy future Canadians want.

Energy East comes after other major pipeline proposals to ship tar sands to the Pacific coast hit the same kinds of hurdles as Keystone XL: massive public opposition and political concern. Critically, both the Enbridge Northern Gateway pipeline, and the Kinder Morgan TransMountain pipeline expansion have run directly into the powerful wall of First Nations in British Columbia, who have committed to using their legal rights to ensure no tar sands pipelines ever cross their lands.

Big Oil just isn’t getting it. Major tar sands pipelines are never going to be easy to build on the continent again. They have been blocked to the south and to the west, and now they will be blocked to the east.

Citizens can have their pick of legitimate concerns ranging from the climate impact of the pipeline (like putting 50 million new cars on the road each year*), to TransCanada’s abysmal safety record (the first phase of Keystone spilled 12 times in its first year of operation). The provincial governments of Canada’s largest provinces, Quebec and Ontario, hav 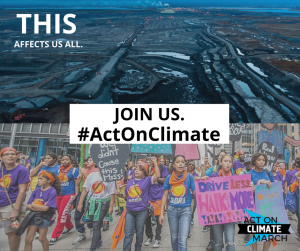 e both responded coolly to the proposal, and so far close to 50 municipalities in Quebec have opposed the pipeline on their land.

On April 11th, tens of thousands of people are going to gather in Quebec City where Provincial Premiers are going to be meeting to discuss Canada’s climate efforts heading towards the December climate talks in Paris.

Their message will be crystal clear: Act on Climate: say no to Energy East and tar sands expansion.

We know that we simply cannot afford tar sands expansion and that most of the remaining reserves are going to have to stay where they are: underground.

So lets support Canadians on April 11th and in their fight to stop tar sands expansion. North America can do better than a future built around fossil fuels and the sooner we get started the better off we will all be.

*According to our methodology developed in Cooking the Books: the true climate impact of Keystone XL, 1.1 million barrels per day of a range of tar sands crude oils typically imported into the U.S. would generate 240 million tons a year of greenhouse gas emissions on a full life cycle basis. We thus estimate the annual life cycle GHG emissions of Energy East to be roughly equivalent to 50 million vehicles or 63 average U.S. coal plants.