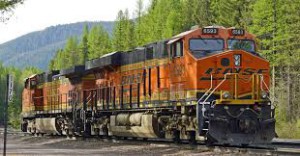 Last week, in response to the latest crude-by-rail derailment in Gogama in Ontario, Canada, I blogged on how evidence is  increasing that, contrary to what some would believe, transporting tar sands is as inherently dangerous as carrying volatile Bakken crude.

The reason for this is simple. Although tar sands bitumen is a heavier, denser, less volatile material than Bakken crude it is still diluted with pentane or natural gasoline, a very light hydrocarbon, to enable it to flow. This diluted bitumen is known as dilbit for short.

As I noted last week, the fact that dilbit contains a hydrocarbon which is as explosive as the Bakken crude “has huge implications for the safety of tar sands crude-by-rail… Put simply, the diluent in dilbit makes dilbit just as explosive as Bakken crude.”

Fast forward to last Saturday morning and there was yet another fiery derailment in Northern Ontario in Gogama, just 40 kilometres from the first one. This time some 30 to 40 tank cars derailed, causing a blaze that lasted for three days.

Once again the train was carrying tar sands crude, but there is currently confusion as to whether it was syncrude or something known as “synbit”, which is a blend of bitumen, syncrude and lighter diluents.

Whatever the exact contents of the recent explosion, what we do know is that both derailments involved the newer – supposedly safer – tank cars known as CPC-1232 models, which have added safety features such as steel cladding at the front and protection over the valves.

The fact that these supposedly safer models caught fire is worrying local officials. “They still ruptured, and they still caught fire,” said Gerry Talbot, Secretary of the local services board, before demanding “We need answers” as to “why is it happening?”

But as Railway Age points out, as the crashes involved tar sands oil – whether dilbit, synbit or synthetic crude – is no safer than untreated Bakken crude.  In fact it is starting to look like that all oil explodes in a derailment, across the whole crude spectrum from light Bakken to the heavy tar sands bitumen blends.

If this is the case, Railway Age argues then that the strategy for replacing older tanks with supposedly safer, newer ones “is based upon an entirely erroneous premise. The whole schedule must be recalculated, based on the evidence that bitumen, diluted for transportation, is simply not an ordinary crude oil fit for carriage in general-purpose tank cars.”

And now the Canadian press is waking up to the fact that transporting tar sands by rail is as dangerous as Bakken. “Concerns about the volatility of oil-by-rail shipments cannot be limited to the Bakken crude that was involved in the Lac-Mégantic tragedy and a spate of other major accidents”, reported the Globe and Mail earlier today.

The paper continued: “The revelation that the crude involved in the Ontario derailments was drawn from Alberta – and not from the Bakken – could widen the debate over the safety of shipping crude oil by rail.”

In an earlier editorial the paper argued that the “Canadian authorities ought to determine whether sludgy Alberta bitumen is as volatile and combustible as Bakken shale crude … There appears to be a widespread assumption it is not; the people of Gogama might tell you otherwise.”

And belatedly Canadian politicians are becoming increasing worried over tar sands transportation too, which is about time as up to now the regulators seem to have been asleep at the wheel.

Yesterday the Canadian Transport Minister Lisa Raitt said that the government was “concerned” about the recent Ontario derailments and demanded that the transporter, Canadian National Railways, appear before a House of Commons committee to explain itself and why its crude by rail trains keep exploding.

That could be a fiery session in itself. In the meantime, and until the industry can make crude-by-rail safer for communities and the climate, all crude-by-rail shipments should stop.