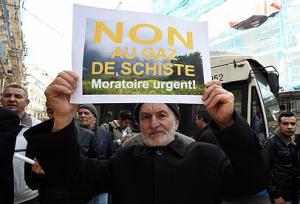 The wave of anti-fracking protests sweeping the globe has now spread as far as North Africa.

In a remote part of Southern Algeria, in the heart of the Sahara desert, there is an unprecedented grassroots rebellion against the shale gas industry in the country.

The protests are reported by the Financial Times to be “making political waves across the north African nation and the wider region.”

Ever since the start of this year, thousands of people have been protesting daily against the local $70 billion fracking project in the rural town of Ain Salah, arguing it could pollute scarce water supplies and the crucial groundwater aquifer that stretches across North Africa.

The stakes are high. Algeria could have the third largest shale gas reserves in the world after China and Argentina and even greater than those in the US and Canada.

The country is currently extremely reliant on conventional oil and gas, which dominates the economy, accounting for 97 percent of exports, and providing generous public subsidies on a raft of goods and services.

As well as concerns over pollution and contamination, there is also a long-standing resentment against the country’s former colonial master, France, and the fact that the French company Total is involved in the fracking process is adding to local tensions. What makes this so potentially toxic for Total is that it is using fracking methods in Algeria which are currently banned in France.

Although the protests have received little attention in the West, they have been making news on African media as well as on social media. The collapse in the oil price has added to the feeling of unease in a country which avoided the unrest of the African spring, in part due to its oil wealth.

The leader of the anti-fracking movement is local school-teacher Fatiha Touni. “Everyone in the world knows that this is dangerous and there are places in the west where this is forbidden, ” she argues. “We are not people to be experimented on. All we have is our water — we need it to water our crops and feed our animals.”

“This is a citizen movement,” Omar Belhouchet, the editor of the daily newspaper El Watan said at the end of last month. “It is very civilized. It is about a national resource; it touches the whole issue of power and corruption. This is citizenship affirming itself.”

In recent days the protests have turned increasingly ugly and violent, with dozens of protestors being injured after clashes with the police in several towns. After one local authority building was burnt down, at one stage the army was called in.

The anti-fracking activists argue that the Police were to blame. “The police directly shot tear gas at the protesters,” Hamza Hamouchene, an Algerian activist based in the UK told the Financial Times. “It was an act of provocation.”

The protests have also spread to the capital, Algiers, giving momentum to the country’s opposition political parties. Late last month, several streets of the capital were sealed off as the authorities tried to block an anti-fracking rally.

With the government arguing it will press on with the project, the protests look set to continue.

“The winds of social change will blow from the south,” argues Rachid Tlemcani, a professor of history at the University of Algiers. “In the north the demands of people are housing, jobs and for their share of the oil revenues. But in the south, they are saying we don’t need shale gas, for the sake of the environment. They have a very high social conscience.”