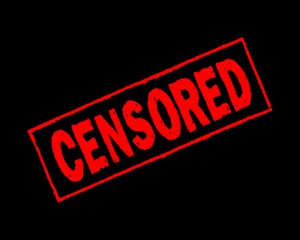 What ever happened to the land of the free?

In a deeply worrying and cynical move, officials in Florida working in the Department of Environmental Protection have been banned from using terms such as “climate change” or “global warming”.

According to a great investigation by the Florida Center for Investigative Reporting (FCIJ), officials in the Department, the frontline agency for researching the issue in the state, have been ordered not to use the term “climate change” or “global warming” in official communications, emails or reports.

One ex-employee recalls being told how to reference climate change and sea-level rise instead as “nuisance flooding.”

The policy of censoring the issue of climate change even affected official departmental reports, educational efforts and public policy, the investigation has uncovered. The Guardian reports how the FCIJ’s investigation is so damning it is as a “bombshell”.

Leaving out the obvious irony that Florida is the state which is probably more vulnerable to climate change than any other in the US, with flooding already in Miami, saltwater encroaching on drinking water supplies and local coral reefs under threat, the revelations are deeply disturbing. They reflect a Mccarthyite tendency by some climate sceptic Republicans to quash any debate on climate change.

The Republican Governor Rick Scott has always said he is not convinced climate change is caused by humans. The FCIJ believe that the unwritten policy of not allowing climate change to be mentioned went into effect after Scott took office in 2011. The climate sceptic Governor also won a second term as Governor last November.

A year before becoming Governor, back in 2010, Scott told reporters he would need “something more convincing than what I’ve read,” to convince him climate change was man-made. When pressed on the issue last May all Scott would say is: “I’m not a scientist”

Then when a groups of climate scientists met him last summer, they were given 30 minutes to talk to the Governnor, ten of which were taken up over introductions. One University Professor recalls Scott asking “no questions of substance.”

The uncomfortable truth is that the evidence points to the sceptic Governor successfully managing to silence his officials during his time in office.

Four former DEP employees from across the state all confirm that the unwritten order was well known and distributed across the state. Another former DEP employee, Kristina Trotta, adds that she was told by her supervisor not to use terms such as “climate change” and “global warming”. She outlines how “we were told that we were not allowed to discuss anything that was not a ‘true fact’”.

Not surprisingly, Scott’s spokesperson refused to confirm or deny whether this was their official position. “There’s no policy on this,” they said.