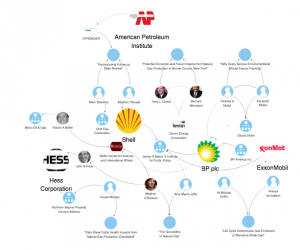 As so often in the past, where the tobacco industry leads, the oil industry follows.

There is now a huge amount of documented evidence showing how the oil industry – desperate to delay regulatory action on climate change – has used the same tactics as Big Tobacco in order to avoid regulatory oversight.

Often both industries have used what is seen as the most effective public relations strategy called the Third Party Technique, which is essentially getting others to speak on your behalf.

For decades, the tobacco industry mastered the technique, using a whole raft of supposedly independent people to speak on their behalf to try and sow doubt on the link between smoking and ill-health.

“Who better to serve as an expert than an actual scientist”, note Naomi Oreskes and Erik Conway in their ground-breaking book “Merchants of Doubt” which compares the tobacco industry tactics with that of the oil industry.

For example, in the late 1990s, Philip Morris, working with its lawyers Covington and Burling, outlined a covert pan-European plan to use supposedly independent scientists in their fight against regulations on second-hand smoke. It was known as “Project Whitecoat”.

Whitecoat’s goal was to “resist and roll back smoking restrictions” but also to “restore social acceptability of smoking”.  One way of achieving this was to do what the industry had always done best: to “sustain controversy.”

Philip Morris International (PMI) and the tobacco industry are still using the tactic to this day. Just on Sunday the Observer newspaper reported how “a bitter academic row has triggered calls for a leading university to withdraw two key scientific papers sponsored by ‘big tobacco’ and used to make the case against the introduction of selling cigarettes in plain packets.”

PMI funded two academics whose research was published by the University of Zurich. But critics have now asked the University to withdrawn the papers arguing they are flawed, although this is naturally denied by the scientists at the centre of the row.

Where Big Tobacco leads, the oil industry follows, but not just on climate change, but also increasingly on fracking.

Last week Public Accountability issued a report on “frackademia,” and what they find is deeply troubling.

Their investigation reveals that pro-fracking studies “are often industry-tied and lacking in scientific rigor.”

Analysing some 130 studies compiled by an oil and gas industry group, Energy in Depth (EID), to try and prove fracking was “fit for public consumption” and that proves the issue around fracking is settled, they found that over three quarters – some 76 per cent – were connected to the industry.

Of the 137 unique studies on EID’s list that they could locate, 56 had strong ties to the oil and gas industry.

The vast majority of studies had not been peer-reviewed, seen as the benchmark for academic rigour. Of these 137 studies, only 19 were peer-reviewed equating to just 14 per cent.

As Public Accountability argue “This suggests that there is a significant shortage of serious scholarly research supporting the case for fracking”.

Drilling into the data further is even more worrying as there was only one peer-reviewed study that dealt specifically with public health concerns, and that was industry-funded.

But it gets even worse. The list even included retracted and discredited studies, including studies that made “false” claims of peer review.

Finally it is not surprising that prominent industry associations, such as our old friends at the American Petroleum Institute, funded and issued numerous studies.

So next time you read something that says that fracking is harmless have a look to see who funded it. Just look for the hidden hand of the oil industry.