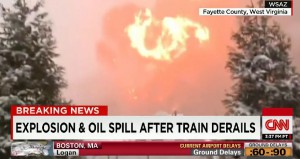 A state of emergency was declared late yesterday in two counties in West Virginia after a crude by rail train oil derailed and exploded, in what is the latest in a long string of accidents in North America.

The derailment of a CSX Corp train carrying fracked shale oil from North Dakota set a number of rail cars ablaze, and forced the evacuation of two towns, destroying at least one home.

The accident, about 30 kilometres south east of Charleston, sent a fire-ball at least 300 feet high spiralling into the sky.

Some 200 families were evacuated as a precaution. At least one of the cars plunged into the Kanawha River, a source of drinking water in Kanawha and Fayette counties. West Virginia Governor Earl Ray Tomblin issued a state of emergency for both counties after the derailment.

Also in response to the accident, West Virginia American Water shut down its local treatment plant. “We expect that approximately 2,000 customers in the Montgomery area will lose their water service within a few hours if the plant remains shut down,” the company said.

According to CSX, the crude by rail train, often dubbed “bomb trains” by the industry’s critics, was hauling 109 cars from North Dakota to the coastal town of Yorktown, Virginia. The West Virginia State Police said that some 9 to 10 of these cars exploded. A spokesperson for the Police commented that “It’s a real mess down here.”

One local witness, David McClung, added “We felt the heat. It was a little scary. It was like an atomic bomb went off.”

The area is becoming an accident hotspot, being just 200 miles west of Lynchburg, Virginia, where another CSX train also derailed and exploded in April last year.

The two new accidents will again heighten the inherent dangers of transporting vast quantities of volatile crude by rail across North America from the fracking fields to refineries which are often on the coast.

As Reuters reports “The latest incidents will likely refocus attention on U.S. and Canadian regulators’ efforts to improve the safety of such shipments, which have spurred concerns over both the flammability of very light oil from the North Dakota Bakken shale as well as the flawed design of older tank cars.”

The simple question is this: how many more accidents will it take before the US Transportation Department acts decisively to bring in tighter safety standards?

We do not want another deadly disaster, like the one in Canada at Lac-Mégantic, where 47 people were killed, before action is finally taken.