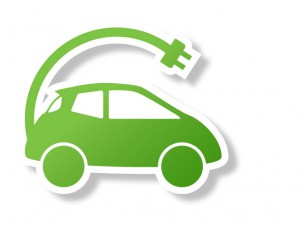 It is pretty hard nowadays to pass a gas station and not notice the plummeting price. Fuel prices have been falling so persistently that it appears that Americans have rediscovered their taste for gas guzzlers.

That would seem a little hasty as low gas prices probably will not last all that long.

Anyone looking toward the long-term could take advantage of this opportunity to shift to an electric (EV) or plug-in hybrid vehicle.

Over the past several decades, the gas price rollercoaster has been increasingly volatile. But, EV technology provides us an opportunity to exit this unstable ride.

The graph below compares the unpredictable nature of gasoline pricing to the consistently decreasing costs of driving an EV. 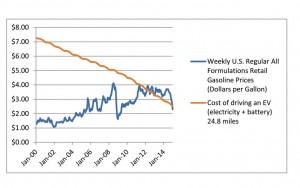 We are all accustomed to the explosive nature of gas pricing as it reflects global supply, demand, current and potential geopolitical crises, and market speculation.

Of the latter, Goldman Sachs’ analysis indicates that when gas prices peaked in 2012, just the buying and selling of oil futures added $0.56 to the price of a gallon of gas.

The price of electricity however is much less affected by the greed of speculators, the threat of armed conflict or economic conditions around the world.

And imagine your local gas station having to first obtain approval from a state regulator prior to raising the price at the pump.

Well, that’s what utilities have to do. And it generally works well for consumers too, despite the cozy relationship frequently enjoyed between utilities and their regulators.

Meanwhile the beastly 85KWh battery inside of Tesla’s Model S will be available for $12,000 ($141.18/KWh). Again, these are replacement costs; the actual cost of the battery in the case of the Leaf adds an additional $1,000 to its price.

These battery prices may seem extraordinary, but they are actually cheap and they are falling fast. Back in 2000, the cost per KWh was estimated at $1,126 by David L. Anderson from a 2009 Masters project at Duke University. Put in historical context, EV battery prices have radically decreased.

In addition, manufacturers provide substantial warranties on this critical component. Tesla stands by its battery for 8 years and unlimited miles. Nissan and GM, Ford and BMW provide an 8 year/100,000 mile guarantee. The downward trajectory of battery prices will likely continue as advances in technology and economies of scale continue to take effect.

Unfortunately, the market price of both gas and electricity do not reflect the damage they inflict upon the environment.

The carbon that pours out of our tailpipes and power plant smoke stacks are primary drivers of climate change. Both must be reduced. A gallon of gas pumps about 19lbs of carbon into the atmosphere. An equivalent amount of electricity produces about 8.5lbs (see calculations).

Despite the beauty that electric cars produce less than half the carbon pollution that gas cars do, EVs may still be responsible for significant amounts of carbon pollution.

The good news here is that as more carbon-based electricity production is replaced with clean sources, the carbon emissions from EVs will continue to drop. And unlike gas prices which fluctuate wildly, solar panels, wind turbines and other renewables have generally only fallen in price.

Electricity produced by clean sources will soon rival natural gas on a per-kilowatt basis. So, the environmental cost of the electric car will continue to fall. And for those who are able to add a rooftop solar array to their home or office, powering an electric car can become truly carbon-free.

There is more than one way to avoid the high price of gas; don’t drive. Of course that is possible for city dwellers. Even in sprawling metro areas like Atlanta, developers and city planners are creating more and more work/play/live centers in an effort to cater to millennials. These urban environments encourage walking, biking and use of mass transit.

But for those who need a car, now is a good time to make the switch to electric. With these low gas prices, sales of larger gas vehicles are increasing. Simultaneously, dealers are more willing to discount the sales price on electric cars.

No one knows what the price of gas will be in the future, but it’s almost certainly going to continue to be higher and more volatile than the price of fueling an EV.

As EV batteries continue to improve in capacity and economy and as clean energy becomes a bigger share of electricity production, consumers and the environment can reap great benefits.

Don McAdam resides in Sandy Springs, Georgia, is a Volt owner, an electric car enthusiast and is currently working on a project to easily covert gas lawnmowers to battery electric.

Pollution per kilowatt by source:

US Regional Electricity Prices (US Average):

The following is a brief explanation of the numbers and calculations used in the graph:

The average American car travels 24.8 miles on a gallon of gas. The typical electric car consumes 7.44 KWh to also cover 24.8 miles. That amount of electricity costs less than $1.00.  But, the battery required to hold that energy costs thousands of dollars. Represented in this graph is the amortized cost of a 24 KWh battery (the battery used in a Nissan Leaf) plus the electricity.