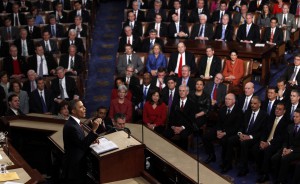 Aside from providing some entertainment, twitter fodder, and political theater…coming on the eve of the 5th anniversary of the dubious Citizens United Supreme Court decision, last night’s State of the Union speech showed us a few important things when it comes to climate and Washington, DC.

1. Big Oil’s icy grip on Washington might be thawing.

While the President paid some unfortunate lip service to increased oil and gas drilling in the US, his statements about the industry almost felt like required talking points…the lumps he felt he had to take in order to get to the more hopeful news of wind and solar jobs skyrocketing.

Gone from the entire speech? The fossil fuel industry-favorite phrase “All of the Above” (nee “drill baby, drill”). That phrase had been the centerpiece of an incoherent energy policy for the administration — one that promoted fossil fuels whilst also raising the alarm of climate change. Climate denial in a new form, as we’ve said.

But this year’s speech was different. Where in years past the President’s speeches had substantial portions devoted to gushing about the oil and gas boom in this country, this year’s speech centered its fawning on a burgeoning renewable energy industry…highlighting that the US is now the global leader in wind energy and installing solar at a fantastic clip.

That is to say, election season matters.

With no more campaigns in his future, President Obama not only was able to pull off a zinger of historic proportions…he also has apparently been able to come out of his shell, returning to the Obama that many were inspired by in the 2008 campaign. He’s pushing aggressive action on a variety of progressive tracks and isn’t waiting for Congress to come along.

One could say he’s had enough of Washington DC politics and is letting loose…but what I see is a President and administration unencumbered by the need to raise millions of dollars from shady sources like the fossil fuel industry…freed to speak the truth and push bold solutions to crises facing the country.

The President’s rhetoric on energy ahead of the 2012 elections was at times appalling. His focus on the American oil and natural gas boom seemed to ignore communities grappling with the ill effects of fracking, and somehow missed the warnings that fossil fuels need to stay in the ground in order to meet our collective climate stabilization goals. But now, with the 2014 election cycle in the past, the gloves appear to be coming off. 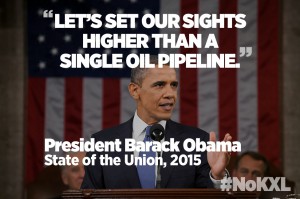 3. Movements can matter…especially when we’re winning.

The discussion of the Keystone XL pipeline last night was striking. First, in the actual State of the Union, President Obama ridiculed the members of Congress wasting the nation’s time debating the pipeline, saying “let’s set our sights higher than a single oil pipeline.” Aside from being yet another good sign in the Keystone XL fight, the snarky remark was an indicator of changing tides…where being on the side of Big Oil will do more harm than good for political aspirations.

Obama’s reference to moving beyond Keystone XL made the Republican response to the State of the Union seem that much more out of step with the nation, with noted climate denier Joni Ernst spending nearly a quarter of her speech talking about Keystone XL without uttering the word “pipeline” somehow. The speech laid bare the reality of Keystone XL for those who push it — they see it as a means to poke the administration and win political points. But, as recent polling shows, the tides have turned and there are no longer political points to be had with this doomed project.

Of course, Obama’s speech was far from perfect on the climate. The Obama administration seems to believe giving at least a little to the oil industry will help the next Democratic Presidential candidate…after all, their legacy rests in some part in the hands of those that follow them. And in that context, it’s still the case that Big Oil can buy some votes in this town…at least for now. The speech was strong on rhetoric and weak on specific plans for climate action. But what the speech showed in small glimpses is the sort of discourse and leadership that could exist in a world with rational campaign finance laws and a democratic process that places the voices of constituents over industry dollars.

And what it also showed is that the climate and #NoKXL movement has come of age and is a force in DC. Time to flex some muscle and make some change.

One first step: Tell the President to reject Keystone XL once and for all.