2015 is already bringing new challenges — including a congress that’s set on ignoring climate science and fighting for the fossil fuel industry instead of the American people. 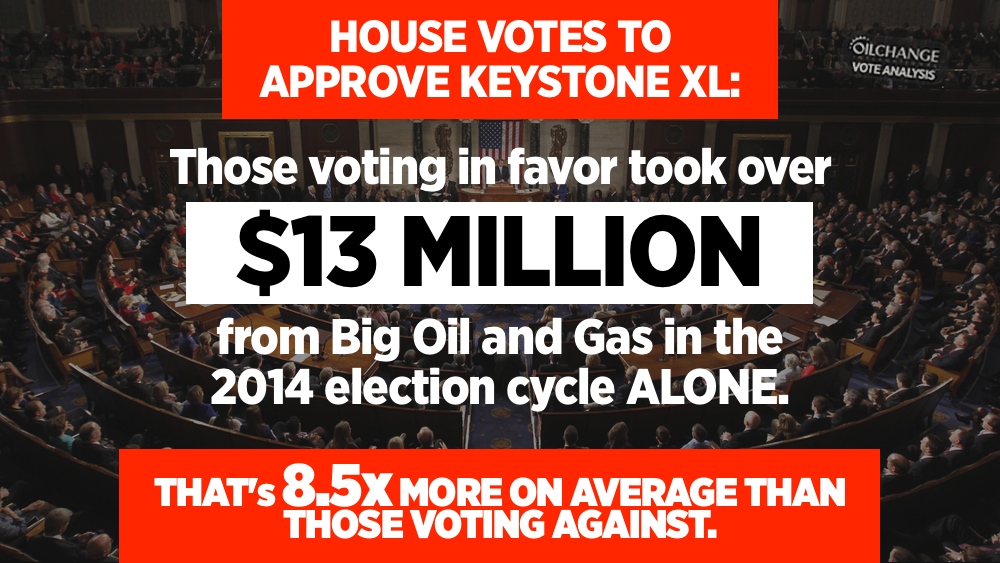 One of their first acts of business has been an attempt to force approval of the Keystone XL pipeline, despite President Obama stating that he’ll veto the legislation. This hasn’t stopped pro-oil legislators from pushing the issue forward and it’s clear why.

We crunched the numbers and found that in today’s Keystone XL vote, members of the House of Representatives who voted ‘yes’ on approving the pipeline took a combined total of over $13 million dollars from the Oil and Gas industry in 2014 ALONE.

Compared to members of the House voting against the pipeline, they took 8.5x more money on average. And this doesn’t even include all the ‘dark money’ being spent by the fossil fuel industry in the most recent elections.

Here’s a breakdown of our calculations. These are based on data provided by The Center for Responsive Politics and our Dirty Energy Money database:

There’s a growing movement rising up to oppose Big Oil’s stranglehold on Washington, but the fossil fuel industry isn’t going down without a fight. Take action thanking the president for his veto threat and calling on him to reject the pipeline outright: http://bitly.com/ObamaNoKXL