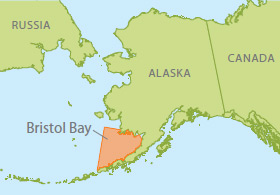 As if the plummeting oil price was not bad enough, there was more bad news for the oil industry yesterday after President Obama signed a Presidential memorandum to protect the vast Bristol Bay in Alaska from future oil and gas drilling.

The White House called the region, which is the size of Florida, “one of America’s greatest natural resources and a massive economic engine, not only for Alaska but for America”.

“Bristol Bay has supported Native Americans in the Alaska region for centuries,” Obama said.  The President said he was taking it “off the bidder’s block” and would “make sure that it is preserved into the future.”

Back in 2010, Obama had temporarily withdrawn the Bristol Bay area from oil and gas development which was due to expire in 2017, and yesterday’s action extends that protection indefinitely. “These waters are too special and too valuable to auction off to the highest bidder,” the President added.

Although remote, the Bay is one of the world’s most valuable fisheries, being the source of the largest global sockeye salmon fishery. These rich Arctic waters are estimated to provide 40 percent of America’s seafood. They support up to $2 billion in commercial fishing and $100 million in recreational fishing and tourism activity every year.

The area is home to numerous species which would have been threatened by oil and gas development, including the Stellar’s eider, sea otters, seals, walruses, Beluga and Killer whales, and the endangered North Pacific Right Whale.

The Bay is part of the North Aleutian Basin Outer Continental Shelf, which has never been drilled, although it was opened up by the Interior Department in the mid-eighties.

But after the catastrophic 1989 Exxon Valdez oil spill the region was added to a nationwide moratorium. The protection for the area has flipped on and off during the intervening years, depending on which Administration is in power.

President George W. Bush’s administration proposed a new lease sale which would have opened 5.6 million acres on the edge of Bristol Bay for drilling, but Obama withdrew those after the catastrophic Deepwater Horizon disaster in 2010. One company with leases in the area is oil giant, Royal Dutch Shell.

How much oil and gas is there is unknown. Federal officials estimate the Bay contains just shy of $8 billion of oil and gas. But with the lucrative salmon industry worth $2 billion annually, this would equate to tens of billions over the life span of oil and gas drilling. So salmon is worth more than oil to this part of Alaska.

Conservation groups and fishing industry groups welcomed the move, something they had been campaigning on for decades.

“This is one of the most important ocean protection decisions that this or any President has ever made,” argued Marilyn Heiman, Arctic program director for the Pew Charitable Trusts.  “There are just some places that are too special to risk,” she said. “Bristol Bay is one of those places.”

“It takes Bristol Bay off the table,” added Dorothy Childers from the Alaska Marine Conservation Council. “Now the president is saying we are not going to have leasing here in the future,” Childers said. “For a future president to undo that would be a very big betrayal.”

David Harsila, president of the Alaska Independent Fishermen’s Marketing Association, called it “about the best Christmas present that President Obama could possibly give us.”

Predictably it was condemned by the oil and gas industry.

“Today’s actions serve to undermine this nation’s ability to achieve an ‘all of the above’ energy strategy that corresponds to our constantly evolving energy needs,” said Kara Moriarty, president of the Alaska Oil and Gas Association. It “takes Bristol Bay off the table for consideration for generations.”

But the story may not be over yet, as the LA Times points out: “Tuesday’s action is only a partial protection for the remote region. Federal officials are expected to decide in coming months whether to allow the largest open-pit mine in North America to be dug in the Bristol Bay watershed.” Ironically, the highly controversial Pebble Mine would affect the very same salmon the President has just protected.

So a cautious cause for celebration, for now, at least. The move by the President is being seen by some as a way of protecting his environmental legacy. The next way he can do that is over Keystone XL. All he has to do is say “No”. And the plummeting oil price gives him a perfect excuse to do so.