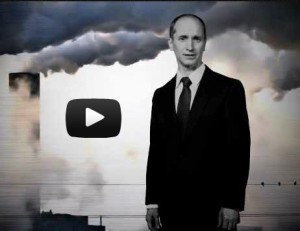 Last week we exposed ExxonMobil’s Outlook for Energy as a corporate fantasy rather than a forecast. We analysed the company’s annual outlooks going back to 2005, and found a consistent and clear pattern of bias against renewables and towards fossil fuels. The Financial Times took note.

We also got a response from Ken Cohen, ExxonMobil’s Vice-President for Government Affairs and Public Relations.

Importantly, Cohen didn’t question any of our numbers, nor respond to our four core criticisms of the Outlook:

In essence, then, Cohen is not saying we got anything wrong, even as he labels our work ill-informed, and “odious”. Instead, he makes two broader points. First, that the company aims to make the outlook “as sober and objective as possible”, because it bases investment decisions on it. And second, he claims that ExxonMobil’s projection is quite similar to projections by others, such as the International Energy Agency.

Last week a journalist asked me why I thought ExxonMobil got things so badly wrong. I said I could think of two possibilities: either the company’s forecasters are incompetent, or the company is trying to pull the wool over people’s eyes. In support of the latter view, Cohen was the architect of campaign, starting in 2005, to use the Outlook for Energy to advance ExxonMobil’s political objectives, as Steve Coll detailed in his opus on ExxonMobil, Private Empire.

But Cohen insists ExxonMobil really does make investments based on this rather flimsy piece of quasi-analysis. If that’s true, it sounds like bad news for ExxonMobil’s shareholders…

For example, in its Outlook, the company is consistently dismissive of new, non-fossil fuel technologies such as solar power and electric vehicles. Its reasons for these dismissals keep shifting from year to year, as its earlier criticisms prove false… yet its future projections generally stay the same. First ExxonMobil claims the alternatives are too expensive, then they’re too intermittent, and now, ok they’re viable, but still will be held back by challenges from “other alternatives”, which the company doesn’t actually name.

This constant invention of new rationalizations for ExxonMobil’s desired future seems to us neither sober nor objective.

In our analysis last week, we pointed out that ExxonMobil’s numbers are very different from those of the International Energy Agency (IEA) and others. For example, all major energy statisticians report recent growth rates of wind and solar generation as between 25% and 28% per year. ExxonMobil is alone in recording just 6% growth.

Ken Cohen didn’t explain that disparity, but pointed to other numbers where his company’s projections were similar to IEA’s, in particular on fossil fuels’ share of the energy mix in 2040. What Cohen didn’t tell his readers is that the IEA publishes its outlook figures for three main scenarios, depending on levels of action on climate change. Cohen chose to compare ExxonMobil’s numbers only with the IEA’s “New Policies Scenario” (NPS), which the IEA says would most likely translate into a disastrous 3.6°C of warming by the end of the century.

Cohen’s claims here aren’t actually pointing out anything new. In fact our analysis criticised ExxonMobil’s emissions trajectory for being close to the NPS in 2040 (and much higher earlier on), as that’s an intolerable level of climate change. Governments have committed to keeping warming below 2°C. If we compare with the IEA’s “450 Scenario”, the pattern is quite different: whereas ExxonMobil says fossil fuels in 2040 will be plateaued (or very slightly decreasing) at 77% of energy, the 450 Scenario projects 60% and falling fast. 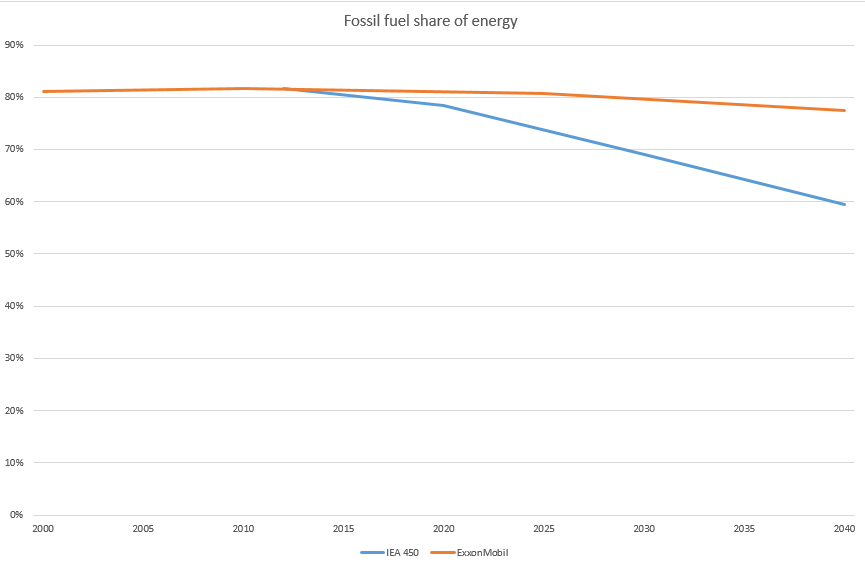 We should add that Oil Change International also considers the 450 Scenario as being too conservative, as it gives only a 50% chance of staying below 2°C, which recent climate science suggests may in fact be too high a target.

In his response, Ken Cohen asked us why we thought the IEA has similar numbers to ExxonMobil’s. The answer is that only some numbers are similar, and only in some (very undesirable) scenarios. We don’t agree with everything the IEA says, but unlike ExxonMobil, it does at least recognise that if we are to address climate change, energy patterns will change significantly.

We’d love it if Ken would answer our questions in return, specifically how his company justifies the four assumptions we highlighted at the start.

PS Ken also took issue with our ‘Exxon Hates Your Children’ campaign. As the company continues to drive us toward a world with diminished food and water supply, greater conflict, and large-scale destruction of property, communities and livelihoods, we believe the evidence that ExxonMobil hates kids is rather stronger than the evidence that the future could look like its Outlook suggests.