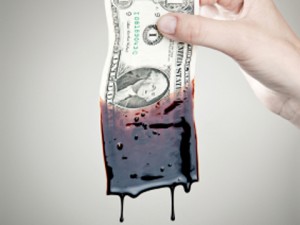 Many people concerned about climate change may be focussed on the ongoing UN climate negotiations in Lima, but back home in the US it is business as usual for the oil and gas industry: they are secretly lobbying to delay action on climate and undermine America’s environmental protection laws.

We know this because of two great investigations in two days by two iconic papers which have essentially uncovered the same tactic: Dirty Energy Money is alive and kicking as hard as ever in American politics as Big Oil unites with the GOP to undermine climate legislation and the federal Environmental Protection Agency, amongst others.

A great investigation by the New York Times over the weekend revealed an “explosion in lobbying of state Attorney Generals in different states by corporate interests such as oil companies who are trying to undermine the federal Environmental Protection Agency.”

“Attorneys general in at least a dozen states are working with energy companies and other corporate interests”, reports the paper “which in turn are providing them with record amounts of money for their political campaigns, including at least $16 million this year.”

The paper cites the example of one letter to the EPA from Attorney General Scott Pruitt of Oklahoma which accused the regulator of overestimating the amount of air pollution caused by energy companies drilling new natural gas wells in the state.

Pruitt forgot to mention that the three-page letter was written by lawyers for Devon Energy, and sent to them by Devon’s chief of lobbying.

The scale of co-operation has taken some by surprise: “It is quite new,” said Paul Nolette, a political-science professor at Marquette University. “The scope, size and tenor of these collaborations is, without question, unprecedented.”

The paper warns that the collaboration between energy companies and the Republicans is only likely to grow once “for the first time in modern American history, Republicans in January will control a majority — 27 — of attorneys general’s offices.”

Even some Republicans are outraged by what is happening.

“When you use a public office, pretty shamelessly, to vouch for a private party with substantial financial interest without the disclosure of the true authorship, that is a dangerous practice,” David B. Frohnmayer, a Republican who served a decade as attorney general in Oregon told the paper.

“The puppeteer behind the stage is pulling strings, and you can’t see. I don’t like that. And when it is exposed, it makes you feel used,” he adds.

This time the paper focusses on an old Bette Noir of the environmental movement, the American Legislative Exchange Council (ALEC). For those who do not know, ALEC is a state wide network of state legislators, who often work hand in glove with the fossil fuel industry to try and weaken environmental protection laws.

According to the Post, fossil fuel lobbyists made their pitch in private meetings last week with dozens of state legislators at an ALEC summit. The lobbyists and legislators put forward several model bills effectively designed to block or delay new environmental standards put forward by the Obama Administration.

If Obama tries to make climate change a priority over the next couple of years, then the industry will be out to scupper his plans.

“With support from industry lobbyists, many Republicans are planning to make the Environmental Protection Agency a primary political target, presenting it as a symbol of the kind of big-government philosophy they think can unify social and economic conservatives in opposition,” writes the Post.

Aliya Haq, a climate change specialist for the Natural Resources Defense Council, said that “ALEC and their cronies would love to see as much delay as possible,” on issues such as climate.

And so we may have progress at Lima, we may have international concensus moving towards Paris next year, but back home in the US, the fossil fuel indutry is still trying to cause havoc.

Old habits die hard: Big Oil has been financing the fight against climate for over two decades. We know they have tried to delay and derail action as much as possible.  We also know that Dirty Energy Money corrodes American political life.

And as more of that dirty money pours into politics, the fight back home is going to get nasty. Get ready for the fight.