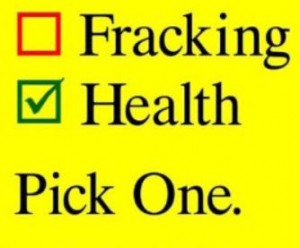 A new peer-reviewed scientific paper, published today in Reviews on Environmental Health, adds to the growing evidence of harm from fracking, especially to women and young children.  But men also should be worried too.

The review – which is based on a comprehensive literature search – makes uncomfortable reading and examines the health impacts of the 750 or so chemicals used in fracking.

Although some of the chemicals remain a secret, we know that fracking uses a mixture of Volatile Organic Compounds such as benzene, toluene, ethyl benzene, xylene and formaldehyde, as well as heavy metals such as arsenic, cadmium and lead. All these contribute to air and water quality and pose a threat to human developmental and reproductive health.

What is becoming clear is that although the science is taking time to catch up to the fracking boom, nearly every month more evidence is emerging of serious health impacts of fracking.

“Research from laboratory and human studies demonstrates that exposure to many chemicals associated with unconventional oil and natural gas drilling can reduce fertility in adults and cause short term and long term negative health effects in babies and children,” argues Dr. Susan Nagel, an Associate Professor of Obstetrics, Gynecology and Women’s Health at the University of Missouri School of Medicine and the senior author of the review.

• Endocrine disruption: Over 130 chemicals used in fracking are known or suspected to be endocrine-disrupting chemicals. Known as EDCs these have been linked to altered reproductive function, increased incidence of breast cancer, abnormal growth and developmental delays in children, and changes in immune function, among other health problems.

• Reduced semen quality: A common mixture of fracking chemicals is benzene, toluene and xylene. These are known as the BTX chemicals and can lead to impaired sperm quantity and quality.

Ellen Webb of the Centre for Environmental Health, and one of the authors of the study, said: “There is an urgent need to evaluate the adverse potential health outcomes for these communities on the front lines of the growing fracking industry.”

The need grows more urgent by the day.