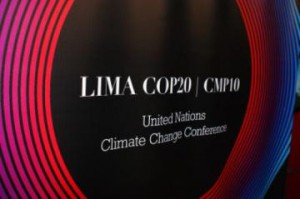 The Lima UN climate talks which open today were always the diplomatic aperitif before the main three course carbon-fest in Paris next year.

However they open with a renewed sense of optimism that after 20 years of delay and political deadlock – often driven by the fossil fuel industry – a deal may well be in sight for Paris.

Although any binding climate deal is likely to fall short of what the scientists tell us is needed to keep global warming to 2 degrees Celsius, for once the talks are opening with a glimpse of hope.

There is no doubt that the recent agreement between China and the US on emissions has changed the whole mood music that surrounds the talks.

“I have never felt as optimistic as I have now,” says Tony de Brum, the foreign minister of the Marshall Islands, which are on the front line of rising sea levels. “There is an upbeat feeling on the part of everyone that first of all there is an opportunity here and that secondly, we cannot miss it.”

Beyond the thousands of delegates and NGOs who have descended on Lima to haggle, negotiate and protest, something deepy significant is happening elsewhere.

Influential diplomatic and financial voices are becoming increasingly vocal that we cannot burn all the fossil fuel reserves in the ground, if we are going to stop runaway climate change.

Last month, Todd Stern, Barack Obama’s climate change envoy said the world had no choice but to forgo developing large-scale reserves of fossil fuels. Reserves of oil, gas and coal will “obviously” have to stay in the ground, Stern told a forum at the Center for American Progress in Washington.

And now it has transpired that the influential Bank of England is – for the first time – to formally examine the risks fossil fuel companies pose to financial stability.

According to the Financial Times, the Governor of the Bank, Mark Carney, has informed British parliamentarians “that his officials have discussed the idea that most of the world’s proven coal, oil and gas reserves may be ‘unburnable’ if global warming is to be kept within safe limits”

A letter seen by the paper says the Bank is “deepening and widening our inquiry into the topic.”

Carney has said that he expected the Bank’s Financial Policy Committee, which is responsible for identifying and reducing systemic financial risks, to “consider this issue as part of its regular horizon-scanning work on financial stability risk.”

Joan Walley, the chairwoman of the Environmental Audit Committee, which has also been examining the issue, called on investors to begin to factor in the concept of seeing fossil fuels as stranded assets “and factored political action on climate change into their decisions on fossil fuel investments.”

It is worth seeing this move by the bank as highly significant. Only recently oil companies such as Exxon were saying that a carbon-constrained world would not impact their business, because it would never become a political reality.

But now Big Oil will be getting worried. Moreover, some investors will also be worrying that in the energy roulette game over the next few years, they will lose a huge amount of money by investing in black fossil fuels – whereas they should have bet on red for renewables.