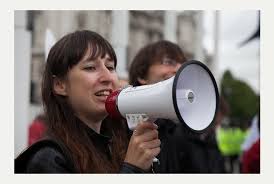 I discovered recently that I was being spied on by BP.

After a few years of increasingly intense activism targeting the company’s controversial entry into the tar sands, its abuse of Indigenous rights and its greenwash-soaked sponsorship of cultural institutions, I started to wonder if BP might be monitoring me.

So I submitted a ‘Subject Access Request’, requiring the company to send me all its files that mentioned me by name. The thick dossier of heavily redacted internal emails and documents I received made for surprising, unsettling and sometimes hilarious reading. It also provided a fascinating insight into some of the ways corporations are monitoring activists they see as threatening to their reputations.

The first time I appear to have blighted BP’s radar was when I wrote an article for New Internationalist in 2010 about the campaign to shut down the Canadian tar sands.

The world’s most destructive oil extraction project contains enough greenhouse gas to tip the world into irreversible climate change. The oil companies’ sinister plot to dig up every last ounce of planet-cooking bitumen, I argued, had to be foiled.

I had co-founded a campaign group – the UK Tar Sands Network – and was working with frontline Indigenous communities in the Alberta tar sands ‘sacrifice zone’ to challenge the major British companies involved in the industry – namely BP and Shell.

In the article, I explained how I had got into conversation with then-head of BP UK Peter Mather at a graduate recruitment event after a climate action group had disrupted it. Having perhaps glugged one too many glasses of complimentary Chardonnay, he boasted about what a fine and responsible company he worked for. I quoted him making the stunningly mendacious claim that ‘if local Indigenous communities tell us they don’t want the Sunrise Project [BP’s first foray into tar sands extraction], then of course we won’t do it.’

Soon afterwards, of course, BP did the opposite. It swept aside the growing local opposition and greedily staked its claim to a thick slice of Alberta’s oil-drenched pie.

What I never expected to discover was what BP made of the article. But there it was, in black and white: someone from BP (whose name was redacted) thought my article was ‘hideous’. Not inaccurate, I noted. Just ‘hideous’.

An individual of note

As my activism against BP increased, so did the company’s monitoring of my activities. I had already realized I had been clocked when I arrived at the company’s 2011 AGM and was subjected to a ‘random’ full-body pat-down search. Now I know that they were acting upon photos describing me as an ‘individual of note’, and ‘triangulating’ my position inside the meeting based on photos I was tweeting – though this didn’t stop us pulling off disruptive actions inside, that year and the next.

But I wasn’t expecting what happened next. In summer 2012, BP appears to have hired a corporate intelligence-gatherer to monitor us. The company stepped up its surveillance when two campaigns I was involved in started targeting its extravagant and multifaceted sponsorship of the London 2012 Olympics.

Following the catastrophic 2010 Deepwater Horizon spill in the Gulf of Mexico, BP had clearly decided to go all-out in its support for the Games, in the hope of gaining much-needed public, political and employee approval. So not only was BP a top-line sponsor of the London Olympics, it was (ahem) a ‘Sustainability Partner’. It was also providing the fuel, sponsoring several athletes, offsetting the carbon footprint and bankrolling much of the ‘Cultural Olympiad’ which accompanied the Games.

Obviously, this had to be challenged. BP was dressing itself up in green finery and parading its ‘sustainability’ credentials everywhere. It was vital that people weren’t fooled.

The first thing we did was target the oil giant’s sponsorship of the World Shakespeare Festival, a high-profile element of the Olympics-linked cultural festivities. We formed a troupe called ‘BP or not BP?’ and started leaping up on stage before BP-sponsored plays to perform short playlets in a Shakespearean style, lampooning or bewailing BP’s unseemly patronage.

With each new stage invasion in Stratford-upon-Avon and London, we got more media coverage, more online support, and more people from the theatre world expressing private and sometimes public doubts about the suitability of such a destructive sponsor.

By June 2012, BP was paying someone, presumably from a specialist security firm, to monitor us and try to discover our future plans. In their reports, two of my close comrades and I are referred to as ‘our regular activists’ and ‘the characters most likely to make an appearance during the Olympic Games’. The spy monitors our meetings, and possibly attends our events.

Around this time I was arrested for an anti-BP sponsorship stunt with another campaign I was involved in, Greenwash Gold.4 We had joined forces with other groups to highlight the fact that BP, Dow Chemical and Rio Tinto were all outrageous choices for Olympic sponsors due to their egregious environmental and social records. We encouraged people to vote for the ‘winner’ (ie worst company) of the Greenwash Gold medal. It gained a lot of negative coverage for all three companies just as they were rolling out their Olympics advertising campaigns.

I was unexpectedly arrested at the award ceremony – a short piece of humorous street theatre in Trafalgar Square at which I pretended to be a snooty BP executive and had green custard poured over me. Some 25 police officers arrived while we were clearing up and arrested seven of us for ‘criminal damage’, refusing to accept that ‘the unknown substance’ we had merrily covered ourselves in was something as benign as custard.

We don’t know who called the police, but we do know from a data request made by another activist that there was a Dow corporate spy in the audience that day.

A few days later, the BP mole sent this email:

‘I saw mention of an anti-sponsor protest planned for central London tomorrow which appears to be aimed against Dow. The Facebook page shows that two known anti-BP activists (X and Jess Worth) have been invited, but no indication that either have accepted (and Worth’s bail conditions probably rule out her attendance anyway).’

I found this message pretty creepy when I first read it. They were monitoring me so closely that it was worth noting my possible attendance at an event that wasn’t even about BP, and they had made the effort to find out about my bail conditions – perhaps from the police. I started to feel stalked.

But since then, I’ve got some perspective. Being monitored closely on social media and watched at public events is nothing compared to the life-shattering intrusion many others have suffered at the hands of police and corporate spies.

Many of us in Britain have watched in horror as revelations over the intrusive actions of undercover police placed in protest movements keep piling up. Police officers are known to have slept with activists to gain information. Several formed long-term committed relationships that were based on lies and ended in heartbreak and confusion with the spy’s abrupt disappearance (ie redeployment).

At least three fathered children they knew they would abandon. It was, in the words of one woman, like being ‘raped by the state’. Many are known to have taken the identities of dead babies, and some spied on the grieving families of black murder victims.

Much less is in the public domain about the activities of corporate spies – but this is starting to change. Comedian and anti-arms trade campaigner Mark Thomas’s excellent new show, ‘Cuckooed’, tells the harrowing story of how Martin Hogbin, one of his best mates and an employee of Campaign Against Arms Trade, turned out to be spying for weapons giant BAe Systems. Several years on, Mark is still dealing with the emotional fallout from such an up-close-and-personal betrayal.

Eveline Lubbers’ book Secret Manoeuvres in the Dark details a whole host of activists who have been befriended and then spied on by corporate spooks. This murky world of ‘grey policing’ has grown dramatically in recent years, as the revolving door between the police and private-security firms has created a new breed of skilled-up, well-connected corporate spies who, at the behest of transnationals, follow the every move of activists that are starting to cause them trouble.

The book reveals how these private-sector stalkers have inserted themselves into protest movements, campaigning organizations and the scientific community to gather evidence for their corporate bosses, including Shell, Nestlé, McDonald’s and Monsanto. Sometimes they get involved in protests themselves, and the lines blur between observer and agent provocateur.

Lubbers argues that these cases ‘point to a general intolerance of dissent and a refusal of public scrutiny and accountability. It is not simply a matter of PR. The aim of covert corporate strategy is not to win an argument, but to contain, intimidate and ultimately eliminate opposition. The strategies to prevent civil society from getting real power and the secrecy surrounding it present a real danger to democracy.’

This is why I have chosen to write about BP’s surveillance of my campaigning. It’s important that activists know they may be being watched, and that they take appropriate security measures.

But I also think we should take heart – from my own experience, at least – because BP clearly felt that the protests and resulting media debate around its sponsorship of culture and sport was potentially damaging. The company was worried enough to pay someone quite a lot of money (I assume) to watch Facebook and Twitter and attend public events for hints on what we might do next.

My spy’s activities didn’t do our campaigning any damage, and is a sign that, no matter how small we may feel in the face of such corporate might, we are still perceived as dangerous.

Sponsorship is Big Oil’s Achilles heel, because it is in the public domain that companies like BP need to cultivate and maintain their good name, to secure the ‘social licence to operate’ that underpins, legitimizes and enables their political and financial clout.

Oh, and BP. I know you’re reading this. So I just wanted to let you know that we still haven’t gone away. Since our first ‘guerrilla Shakespeare’ performance in April 2012, ‘BP or not BP?’ has given unsanctioned pop-up performances on multiple BP-branded stages, in the British Museum and in Tate Britain. Our most recent Viking flash mob involved 200 performers. In fact, we’re doing the opposite of going away. I look forward to seeing you soon!