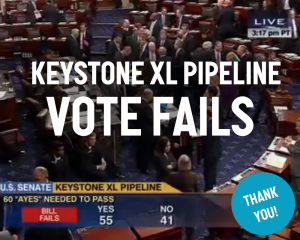 In the end the vote was agonisingly close, but Big Oil’s buddies in the Senate fell at the final hurdle in their attempt to approve the controversial Keystone XL pipeline.

Deemed the most significant attempt yet to try and ram through approval of the pipeline, the attempt by Democratic Louisiana senator Mary Landrieu failed last night by one vote to gain the 60 vote threshold needed to pass the legislation.

In the end the vote was 59 for  and 41 against. In all fourteen “oily” Democrats joined all 45 Republicans in voting for the bill. But it was not enough.

Landrieu, known as Big Oil’s best buddy in the Democratic party, came up agonisingly short, but short she was.

This was big bucks politics in play, with many of the Senators approving the pipeline having a history, like Landrieu, of being funded by the oil and gas industry. For more on this, search your Senator’s name in Oil Change International’s (OCI) interactive online web tool, Dirty Energy Money.

Speaking before the vote Landrieu had said that the main reason to support the bill was that it would “signal a great sign that America understands that energy independence for our nation is possible for the first time ever”.

In doing so, she completely ignored work by OCI and others that shows that KXL is essentially an export pipeline.

She is also ignoring recent comments by President Obama recognising that fact too. Last week on a trip to Burma, Obama said: “Understand what this project is: It is providing the ability of Canada to pump their oil, send it through our land, down to the Gulf, where it will be sold everywhere else. It doesn’t have an impact on U.S. gas prices.”

Obama has also maintained that the glacially slow State Department environmental review of the pipeline – which has been going on for years – should be completed before any final decision is made either way.

The vote is a clear win for the growing ant-KXL pro-climate movement. “Today the U.S. Senate decided to stand on the right side of history,” California billionaire Thomas Steyer, who spent over $50 million backing pro-environmental Democrats in 2014. He added: “This is a legacy-defining issue where one’s position signifies whether they are standing up for or against the next generation on the issue of climate.”

But it is by no means the end of the matter. For the first time since 2006, Republicans will control both sides of Congress in January. Mitch McConnell, the Kentucky Republican who will become Senate majority leader in January, insisted the Republicans would be back to force a vote next year. “I look forward to the new Republican majority taking up and passing the Keystone jobs bill early in the new year,” he said.

As Newsweek reports “When Republicans take control of the Senate in January, Congress will likely be staffed with enough pro-Keystone senators to pass the legislation and possibly even override a presidential veto.”

Other commentators believe that the Republicans will still fall short of the 67 votes needed to override a presidential veto. Although, worryingly, the New York Times argues that Obama “might use Keystone as a bargaining chip: He would offer Republicans approval of it in exchange for approval of one of his policies”.

But all is not lost. The anti-pipeline movement is growing every day, emboldened by the growing grassroots movement against Big Oil in the US. And last Friday, the President of the Rosebud Sioux tribe in South Dakota, Cyril Scott, said he would see the building of the KXL pipeline, which is due to slice through the Rosebud Sioux reservation, as an “act of war.”

Others too are gearing up for the fight. “Today’s defeat of Keystone XL should send a strong signal to the incoming GOP-led Congress that farmers and ranchers will never back down to their oil soaked intentions. We call on President Obama to stand up and reject Keystone XL now,” said Jane Kleeb of Bold Nebraska.

Steve Kretzmann, the Director of OCI added “This pipeline makes no sense in today’s oil market, before you even begin to consider climate and the rights of landowners. Republicans and oily Democrats need to face facts – Keystone XL will never be built”.