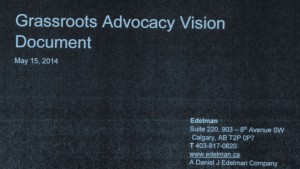 Later today we could see a vote in the Senate, tabled by Louisiana Democratic Senator Mary Landrieu, which could authorize the construction of the controversial Keystone XL pipeline, although President Obama still has a veto on any final decision.

According to CNN, Landrieu, who receives millions in funding from Big Oil,  says she has enough votes to reach the all-important 60-vote procedural threshold.

The Louisiana Senator has been scrambling to attract at least 15 Democrats needed to join the Republicans, and although she told reporters last night that she had achieved the magical 60 threshold, uncertainty remains over whether this is in fact true or not. So Landrieu’s sense of optimism may yet be misplaced.

Any wavering Senators would be well advised to examine some leaked documents obtained by Greenpeace, which reveal TransCanada’s “dirty tricks” on another of its pipelines, the Energy East Project, which would carry over a million barrels of tar sands a day to the East of Canada.

The documents reveal that TransCanada, which is also behind the KXL pipeline, has enlisted the services of the PR company Edelman to target groups opposed to the Energy East project in Canada.

The PR strategy has been criticised as a desperate “smear campaign” by those who are targetted in it.

The documents reveal that Edelman proposed “a perpetual campaign to protect” the pipeline, by in part confronting the company’s critics. “We cannot allow opponents to have a free pass,” Edelman advised TransCanada.

It also recommends the classic public relations technique of using third parties – supposedly independent voices to “put the pressure on” the pipeline’s opponents.

“Third-party voices must also be identified, recruited and heard to build an echo chamber of aligned voices,” argue the documents.

Edeleman also calls on TransCanada to build a fake grassroots or Astroturf campaign in favour of the pipeline, by recruiting 35,000 activists.

Central to the PR plan is that Edelman argues that TransCanada should attack its critics by “distracting them from their mission and causing them to redirect their resources.”

To this end, the global PR company suggested “opposition research” to target groups such as the Council of Canadians, David Suzuki Foundation, and Avaaz including questioning their funders and any litigation issues and audits they may be facing.

It also suggests targeting a small community group in Ottawa, Ecology Ottawa which more often than not fights for more bike lanes. Ben Powless, a campaigner at Ecology Ottawa said “To me, it’s a smear campaign really trying to shut down the voices of local people who have legitimate concerns”.

Wilks called on Edelman to “cancel its TransCanada contract and stop promoting one of the world’s dirtiest oil pipelines.”

The documents have been published online by Desmogblog – to see them go here.