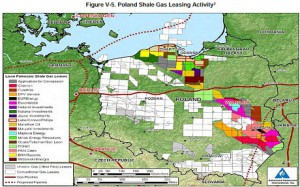 It is billed as Europe’s Number 1 shale gas conference. Next week, over 500 people will descend on Poland for the 5th annual “Shale Gas World Europe” conference.

The promotional blurb says it will “allow you to meet and do business with the largest gathering of Europe’s unconventional pioneers and help develop the future of shale operations across the continent”.

But the conference comes as the Polish shale industry is in crisis.

We are a long way from three years ago when it was announced that Poland could have gas reserves which exceeded 5 trillion cubic metres, which would have given the country the largest shale reserves in Europe. Since then, Polish reserve estimates have been consistently downgraded.

Last week, the Economist Magazine, not generally seen as a progressive environmental rag, talked about how international oil companies were “fleeing” the country, as the Polish dream of replicating America’s fracking boom had “spluttered out”.

The bottom line is that the reality has not lived up to the hype and the situation is clearly going to get worse with the falling oil price.

Today’s Financial Times follows up the story with some hard numbers: of the eleven foreign companies which invested in the country over the past four years, seven have pulled out. Big name players such as Total, Marathon Oil, Talisman Energy, Eni and ExxonMobil have all packed their bags and left.

Hindered by the country’s bumbling bureaucracy and a myriad of other factors, only 66 wells have been drilled. None of those are commercial: producing only 10% to 30% of the gas flow needed to be anywhere near commercially viable.

“We gave it our best shot,” adds Kamlesh Parmar, chief executive of British driller 3Legs Resources, which pulled out of the country in September. “We got to a point where we could not justify carrying on. It is going to take longer and cost more money than most people imagine.”

According to the Economist, Palmer also heads the Polish Exploration and Production Industry Association, but there must be a certain irony of an industry association being run by someone who has pulled out of the country.

The government now says it could well be 2020 until commercial shale gas could be produced with similar profit levels to those in the US.

As international companies leave Poland, they are already eyeing up other countries in Europe. The Shale Gas World Europe conference includes a session on “is the Ukraine the next big hope for European shale?”

The tensions between Russia and Western Europe are severe enough already over Ukraine. Add the explosive hype up of a potential Ukrainian shale gas revolution into the political tinderbox and anything could happen.