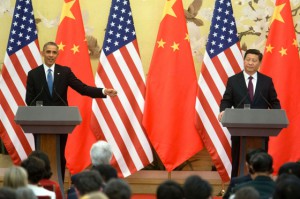 One step forward – two steps back or two steps forward one step back? It’s been a topsy turvy couple of weeks as far as the climate is concerned.

Last week, we had the Republicans gaining control of both sides of the House and then this week Obama pulled a climate rabbit out of the hat with the US-China deal.

There is no doubt that the agreement between the US and China is an historic deal that gives new momentum to the international climate talks, that could otherwise have been heading for the predictable stalemate in Paris next year.

As the Financial Times argued in its leader yesterday “hope springs anew” now for the climate talks, which the paper now feels like a “dance worth watching”. Of course “the biggest plus,” says is “China’s willingness to make a commitment” to reduce emissions.

The same paper picks up the universal reaction of the predictable lack of detail to make meaningful analysis extremely difficult and the equally predictable reaction from the Republicans to oppose it.

What timescales that are being proposed are also inadequate to starve off-climate change. Others, like Bill McKibben, have also pointed out that of course the agreement is not binding in any way.

But there are positives. Without any agreement between the US and China, Paris could well have been doomed to failure and as McKibben also points out, it is another message that the writing is on the wall for fossil fuel investors. “It is a good reminder that fossil fuel investors should continue their flight to safety,” he says.

James Cameron, chairman of Climate Change Capital, reiterated this message calling it a “further wake up call to the investment community that continuing to pour money into fossil fuel companies is being irresponsible to their own investors – the pension funds and the like – because they will be investing in what will become stranded assets, stuck in the ground with no chance of being exploited.”

The BBC also picked up on this point arguing the deal “sends a powerful signal to financiers that investing in dirty fuels for the future is becoming a risk.”

It is not just investors but government too that are still pouring money into fossil fuels. Last week OCI and the Overseas Development Institute (ODI) produced a report which had concluded that governments are still spending a whopping $88 billion every year supporting fossil fuel exploration.

Now the International Energy Agency has put the figure of consumption subsidies for fossil fuels at a colossal $550 billion a year in it is Annual World Energy Outlook, which is four times the $120 billion paid out in incentives to renewables. (Note: IEA’s figures do not include any production subsidies, including those for exploration that were highlighted by OCI and ODI last week).

There is so much money being poured into fossil fuels that it is “holding back investment” in renewables, the IEA contends. Fatih Birol, chief economist at the IEA, argues that $400bn of clean energy investment is needed to be increased to $1.5 trillion a year to have any chance of limiting global warming to 2C increase.

He added that if we do not radically change the “trend in energy investments we are soon going to use all of the [carbon] budget given to us by nature. And then we have a different world.”

Birol warned that even with the US-China deal “we do need to get a clear direction in Paris next year. Like Last Tango in Paris, this is the last chance in Paris. If we are not able to do that we may say goodbye to the world we are used to.”