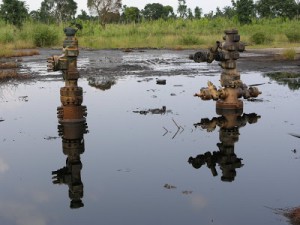 Today is the nineteen anniversary of the muder of the writer, Ken Saro-Wiwa, by the Nigerian junta for his campaign against the oil giant Shell.

Saro-Wiwa was the leader of a campaign by the Ogoni against Shell’s chronic pollution and gas flaring in the Niger Delta.

Whilst the oil giant quite clearly operated to double standards and made huge profits, the locals were on the front line of Shell’s pollution, but they received no compensation in return.

In those nineteen years, life has moved on in the Delta, but little has changed.

The overt state violence against many of the communities may have subsided but many of those communities still live in a grim vortex of bone-grinding poverty and pollution. And so, nearly twenty years after the death of Saro-Wiwa and his comrades, the community protests continue, especially in Ogoni.

As Patrick Naagbanton, the environmental rights activist, who himself is from Ogoni, argues in this month’s New Internationalist magazine: “a new wave of anger, manifesting in large protests, is sweeping through Nigeria’s Ogoni enclave”.

In one blockade last December, nearly 5,000 women and children protested at the Government’s lack of action on implementing the recommendations contained in a pivotal UNEP report on the state of pollution in Ogoni.

The UNEP report was published in 2011 and called for the “world’s most wide-ranging and long term clean-up exercise ever undertaken”. UNEP argued that the Nigerian government and oil industry should cough up the $1 billion needed for the extensive clean-up.

Since then progress has been painfully slow. The Federal Nigerian Government has now established a multi-stakeholder “Consultative Committee” whose aim is to supposedly fast track the environmental restoration of Ogoniland as recommended by UNEP.

The 14-member committee, which is controversially being run by the Minister of Petroleum Resources, Mrs. Diezani Alison-Madueke, was inaugurated last month.

Not surprisingly, Alison-Madueke’s appointment is causing real concern amongst environmental groups in the Delta. Indeed, Environmental Rights Action/Friends of the Earth Nigeria (ERA/FoEN), recently argued that the involvement of Alison-Madueke means that Shell has effectively “hijacked the process,” due to the historical close links between the government and oil giant.

ERA/FoEN Executive Director, Godwin Ojo said: “We strongly affirm that Shell has hijacked this process through the minister of petroleum. The involvement of the same minister who has left out vocal groups that have demanded that Shell be made to take full responsibility of the Ogoni pollution which can best be categorized as ecocide.”

Ojo adds that “Our recommendations have not changed. Shell should have no role in the clean-up process beyond the polluter pays principle.”

We know that the tensions are likely to grow as the clean-up is meant to start and the country faces further community protests in the run up to the 20th Anniversary of Saro-Wiwa’s death, next November.

Shell meanwhile is still up to its old trick of greenwashing its own operations in the country. To mark Nigeria’s centenary, the oil giant recently announced it will pay about Naira 2 billion (about $13m) to mark the occasion. The Shell-financed projects include a 200-seater library; a health project and upgrading athletics infrastructure.

So why has it taken Shell nearly twenty-five years to act? It is, as usual, far too little far too late from the oil giant.

No wonder the people in the Delta are angry, especially over the UNEP report. Nnimmo Bassey is the ex-head of ERA. He argues “The UNEP report clearly attests to the decades of ecological aggression in Ogoniland. It is scandalous that no real action has taken place. Each passing day of delay places a death sentence on the people”.