In a report released last week, Oil Change International and the Institute for Energy Economics & Financial Analysis demonstrated how the movement against Keystone XL and other tar sands pipelines has contributed to a decline in the profitability of the tar sands industry.

The declining profitability of tar sands production has led to lower investment forecasts and the cancellation of three major projects, with further cancellations looking increasingly likely.

Now we have published the chart below showing these emissions savings against those of key climate policies of the Obama Administration. 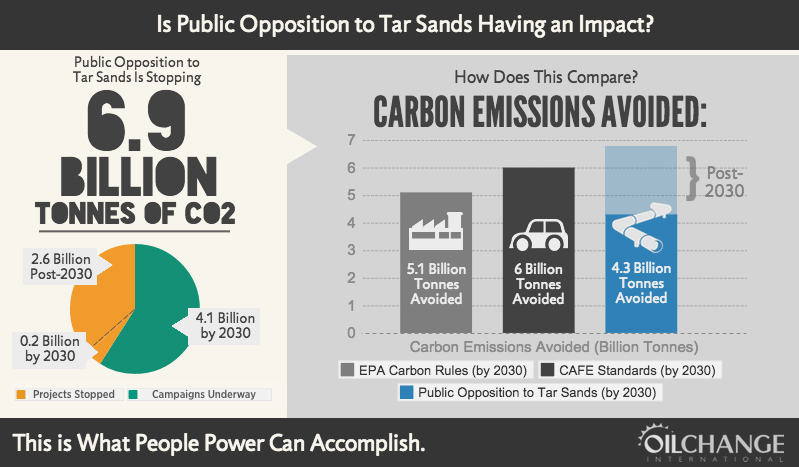 Should the emissions saved from demand-side policies such as vehicle efficiency standards (CAFE) and power plant carbon rules be compared to those saved by supply-side changes such as the cancellation of oil production projects? We, and others such as the Stockholm Environment Institute, believe they should be, although it is important to understand how these approaches differ.

Estimates of savings from cancelled projects assume that the economics of these projects will not change sufficiently to restart them. By counting this carbon as ‘avoided’, Oil Change International is assuming that the industry will not succeed in improving the economics of these projects and that the climate movement will continue to have a material impact on tar sands production for the foreseeable future. In other words, do you want to count on public concern and activism around climate growing, or do you want to count on politicians successfully taking action on climate?

However, if a tar sands mining project does not go ahead then the bitumen that would have been extracted by that project will remain underground. The emissions that would have been released to the atmosphere by extracting, processing and consuming that bitumen can with a high degree of certainty be considered to have been kept in the ground with the bitumen.

While it might be argued that some comparable amount of crude oil will simply be extracted elsewhere to make up for cancelled production, it is far from clear that barrel-for-barrel this is actually the case. The argument assumes a predictable level of demand and supply when in reality both are in flux due to a number of factors.

On the supply side, this can be seen most clearly in the current behavior of the oil markets. Until recently, most oil analysts expected Saudi Arabia and the rest of OPEC to reduce supply if prices fell below roughly $90/barrel.[1]

However, thus far Saudi Arabia has refused to cut production preferring instead to let prices fall and maintain market share. The key here is that oil markets are unpredictable and we cannot make assumptions based on either the past or standard economics.

On the demand side, while levels of demand cannot react quickly to changes in supply and price, this is not true for the longer term response. Indeed, over the period of the coming decade or two, the trajectory of global oil demand is seriously in question.

The fact is that the future demand for oil is a matter of speculation – not a statement of fact. Agencies tasked with making forecasts have highly sophisticated models for making informed predictions but these are often inaccurate and are frequently adjusted as circumstances, particularly technology, changes. According to its own review, the EIA has overestimated crude oil consumption in nearly 69% of its projections since 1994. In other words, it overestimates oil demand more times than it underestimates it.

The math of extraction based carbon accounting and fossil fuel supply is much simpler. The world’s leading climate scientists have calculated how much carbon can be emitted to the atmosphere before average global temperature rise will exceed 2 degrees Celsius (3.6 Fahrenheit), beyond which climate change may become irreversible and catastrophic. They have also calculated that to avoid surpassing that limit, less than a third of existing proven fossil fuel reserves can be exploited.  Therefore, most of these reserves must be left in the ground.

Exactly which reserves, and whose, to leave in the ground, is of course the sticking point. But it’s hard to believe that those reserves that are most expensive and carbon intensive such as the tar sands and the Arctic would not be on that list.

Stopping tar sands projects and leaving billions of barrels of this carbon intensive form of crude oil in the ground is imperative.  So too is counting the carbon sequestered whenever a tar sands project is cancelled.

[1] OPEC’s manipulation of prices is often cited as a reason the oil market does not usually function according to the standard economic formula of: additional supply = lower prices = more demand.