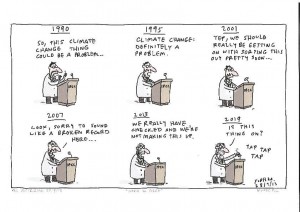 The “clock is ticking”. “Little time left”. The “Starkest Warning Yet”. The “Final Warning”.

Let’s not forget we have been here before and that the scientists have been warning for years – decades even – that we have to disinvest from fossil fuels if we have any chance of avoiding 2 degrees warming.

So far, the warnings have not been heeded. They have often been drowned out by a cacophony of noise generated by the oil industry, its lackeys in public office and its myriad of neo-liberal front groups who have received hundreds of millions of dollars to delay any meaningful action on climate.

So we have come to the “final warning” as the scientists warn that we will have to have eliminate the use of fossil fuels entirely by the end of the Century if the 2 degrees limit has any hope of being achieved.

It is worth pausing – just for a moment there – and think about the ramifications of that. We and our children’s generation will have to find the ingenuity to rid ourselves of the polluting hydrocarbon age and totally re-configure, for the large part, how we generate our electricity, heat our homes, and fuel our cars.

Yes the renewable, clean energy revolution has started but it is a long, long way to go before we start realising that the end-game for fossil fuels is in sight.

And then we come to the numbers, which are the little details that don’t actually make any rational sense when you look at them.

The scientists maintain that if we are going to try and keep to 2 degrees Celsius we must restrict fossil-fuel burning to about 1 trillion tons of carbon dioxide.

As the New York Times pointed out yesterday: “Yet energy companies have booked coal and petroleum reserves equal to several times that amount”

The scientists tell us we have to disinvest from fossil fuels, and yet the oil and gas industry is spending $600 billion a year to find more oil and gas, which we cannot burn.

As one co-author of the report, Dr Ottmar Edenhofer from Germany’s Potsdam Institute for Climate Impact Research argues. ““We have much more coal, oil and gas underground compared to the amount we can release into the atmosphere in the next five decades if we want to avoid dangerous climate change”.

If you think that the industry is acting irractionally, it is worth remembering these companies are not operating in isolation – they are supported by a vast carbon web of companies, governments, banks, investors and insurers who are all pouring billions of dollars into projects whose end product we should never use.

There would be ridicule if banks were funding the setting up of a global restaurant chain that after years of building could never serve food. Yet we are doing just that. Funding projects that should never start. It is financial and ecological madness.

The bottom line is that because the fossil fuel industry has so much capital already invested or lined up to be spent extracting fossil fuels, it will just carry on doing so, ignoring the desperate calls for action from the climate scientists.

The industry may turn around and say we have to carry on drilling to preserve our standards of living and the global economy. But that too is a lie. As the Financial Times points out this morning, climate change can be prevented without seriously denting global economic growth.

The message is simple: As UN secretary general, Ban Ki-moon said yesterday “Leaders must act. Time is not on our side … reduce your investments in the coal- and fossil fuel-based economy and [move] to renewable energy.”

But the oil industry will not be listening . They will just carry on drilling like they have always done.