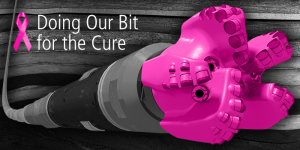 You may have seen this image recently and it’s exactly what you think it is: a pink drill bit.

It’s clear this was a blatant attempt to curry public favor and earlier this month we decided to take action along with our friends at Breast Cancer Action, CREDO, New Voices Pittsburgh, Food & Water Watch, and EcoWatch. Together we gathered more than 150,000 petitions and delivered them over the weekend to Susan G. Komen, urging the breast cancer group to cut their ties with the fracking industry and refuse the check from Baker Hughes.

The protest continued with a group of activists on Sunday gathering outside the Pittsburgh Steelers football game where a Baker Hughes executive was set to hand deliver their $100,000 check to Komen’s Chief Revenue and Marketing Officer.

So what’s the big deal anyways? Well, among the many ills associated with oil and gas fracking is the use of a chemical cocktail to break apart the rock formations during the fracturing process. This fracking fluid contains multiple cancer causing chemicals and has contaminated water sources around the country.

In short, Baker Hughes is making money off pumping carcinogenic chemicals into the environment and is now attempting to hide behind a check to Susan G. Komen to appear to be good guys in the fight against cancer. This is a slap in the face to all those living with — and struggling to survive — the impacts of fracking.

Our friends at Breast Cancer Action deserve a huge amount of credit for standing guard against these sorts of antics. They’ve even coined the term “pinkwashing” — think greenwashing, but for breast cancer awareness. From pink guns to pink drill bits, companies all over the country use the “pink” brand in attempts to win over public opinion.

It shouldn’t surprise us that Big Oil and Gas is joining this pinkwashing trend; they will do whatever they can to try to clean up their image, but we aren’t going to let them get away with it. It’s time for Susan G. Komen to stand up for healthy communities and cut their ties with Baker Hughes.

Our petition to Susan G. Komen has already been delivered, but you can still sign it here to show your support.