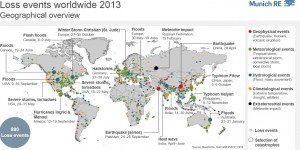 Slowly but surely the world’s banks are waking up to the dangers of climate change and the idea that carrying on investing in fossil fuels might be a risky and reckless idea.

It looks as if the Bank of England, having been slow to start to talk about climate change, may actually be taking a lead on the issue that we cannot burn all of the fossil fuel reserves if we are to prevent catastrophic climate change.

Earlier this month, Mark Carney, the Bank’s Governor told a World Bank seminar that the “vast majority of reserves are unburnable” if global temperature rise is to be restricted to below 2C.

And now the Bank has written to dozens of insurance companies asking them to assess what risk climate change poses to their solvency and earnings.

The bank’s letter is seen, says the Financial Times, as a highly unusual move and a “sign of regulators’ concern about the potential financial fallout of global warming.”

The bank’s Prudential Regulation Authority (PRA), which is responsible for the “prudential regulation” and supervision of some 1,700 banks, building societies, credit unions, insurers and major investment firms, has sent a letter to some 30 insurers.

In the letter, the PRA asks the insurers whether the effects of climate change such as increased temperatures or more frequent extreme and unpredictable weather would start affecting “the viability of your business model”.

The letter also inquires if companies have considered the way climate change could affect their investment portfolios.

The British insurance industry has reason to be worried, being the third largest in the world.So too has the wider industry: Globally there were some 880 loss events last year, according to re-insurer, Munich Re, costing the industry some U$ 125 billion.

Mark Campanale, from the think tank Carbon Tracker, who has been warning about the concept of unburnable carbon for a number of years, welcomed the bank’s intervention. “It’s clear that a reliance on a future repeating the past is not valid for dealing with climate change,” he said.

As if to emphasise the point, this week Governments are set to approve the latest UN draft on climate change at a meeting in Copenhagen. It warns global warming may have “serious, pervasive and irreversible” impacts on human society and nature.

It goes without saying that if substantial and sustained reductions of CO2 are needed, then for the oil industry and those who insure it, the bottom line is that climate change will affect “the viability of your business model.”

It makes so much financial business sense for the insurance industry to be at the forefront of pushing for positive solutions and a clean energy future, not propping up the dying risky days of the hydrocarbon age.