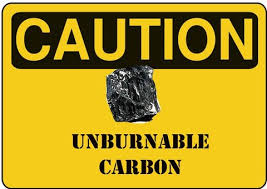 The oil industry and its allies are used to dismissing those who are warning about climate change as a bunch of lentil-eating, sandal-wearing commies.

And now another powerful voice has warned about “unburnable carbon”.

Last Friday, Mark Carney, the Governor of the Bank of England, warned that fossil fuel companies cannot burn all of their reserves if we are to avoid catastrophic climate change.

Carney told a World Bank seminar at the end of last week that the “vast majority of reserves are unburnable” if global temperature rises are to be limited to below 2C.

The Bank’s Governor warned that the lack of long-term thinking by governments and businesses could lead to what he called the “tragedy of horizons” which could in turn lead to market failure.

And with uncanny timing, Carbon Tracker has unveiled new research today which reveals just how badly the oil industry is suffering from that “tragedy of horizons”.  They accuse the industry of paying lip service to the climate risk.

According to Carbon Tracker, although 99% of the 81 sampled coal, oil and gas companies recognise climate change poses a risk to their businesses, only 7% of companies provided evidence of adequately integrating that risk into corporate project and capital expenditure assessments.

A staggering 80% of the oil and gas companies surveyed did not display evidence of running climate scenario analyses of different temperature increases due to climate change. And only 10 per cent undertook stress-tests on projects against conditions similar to a 2°C future.

Carbon Tracker argues that this shows that investors are receiving insufficient information on the vulnerabilities of companies to fossil fuel disinvestment campaigns.

“With the IEA forecasting that $23 trillion will be invested in expanding the fossil fuel sector up to 2035, putting this amount of capital at risk doesn’t leave much room for complacency in how climate risks are disclosed,” said Campanale.

In fact if the “vast majority of reserves are unburnable” as Carney maintains then a significant proportion of this $23 trillion investment could be at risk, if governments move towards a low carbon future.