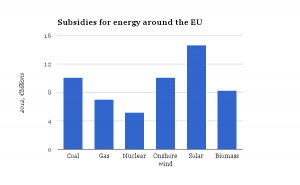 Despite an EU commitment to phase out fossil fuel subsidies by 2020, countries across Europe are still subsidising dirty coal boy over €10 billion a year, according to new figures released by the European Commission today.

The report by the Commission analysed data up to 2012, the last date that figures were available.

They concluded that, across the 28 EU nation states, the amount of public subsidy in the energy sector, excluding transport, was in the region of €120-140 billion.

Given the push across the continent to promote renewables, the largest amount of subsidy went to solar – some €14.7 billion – and then onshore wind €10.1bn.

However coal received the same amount of subsidy as wind with €10.1bn, with natural gas receiving about €7bn. This means that these two fossil fuel industries are still receiving billions at the same time as the EU is trying to lead the fight against climate change.

Nuclear power, which brings its own set of problems of security, safety, waste and cost is also subsidized to the tune of €5.2 billion.

The report also examines total historical subsidies for the period 1970 to 2007 within the EU and found that coal had been subsidised to a massive €200 billion for coal, with nuclear even more at €220 billion.

However the report goes on to add that, beyond direct subsidy support, there were also long-standing subsidies to the European coal industry “designed to ensure that domestic coal remained competitive with imported coal.”

The report estimates the magnitude of that intervention at around €380 billion for the period 1970-2007, the majority of which was in Germany.

Adding these two gives nearly €600 billion subsidies towards coal, much of it during years that Governments knew we had to reduce fossil fuel investments due to climate change.

The report also tries to quantify the external costs of energy production – such as health, environmental impacts and climate change – which were in the range of €150-310 billion in 2012, with a central value of €200 billion.

However they admit that “methods for quantifying external costs come with a high degree of uncertainty, and the report only aims to identify orders of magnitude for external costs.”

The sooner this nonsensical situation is rectified the better for all of us and the climate.